Each brand in the top 10 saw a rise in sales last month, and in fact, 23 out of the top 25 brands recorded year-on-year sales growth. The only two brands that did not get in on the action were Honda, in somewhat a surprise, and Land Rover.

Nonetheless, Toyota clung to pole position as the market-leading brand in March, with its stranglehold over the market seemingly unshakeable. In total, the Japanese powerhouse reported 21,319 new cars as sold, which was 21.2% higher than a year ago.

Next best was Mazda, at 10,785 vehicles. Despite a 58.2% increase, this was less than half the market leader. Rounding out the top three was Hyundai, with a 29.1% increase allowing it to record 6,852 new car sales.

It was also a special occasion for MG, which for the second month in a row, featured in the top 10. The Chinese-owned brand with British roots sold 3,303 cars in March, up 167% versus March, 2020.

There were strong increases right across the board when it came to each of the leading car models sold last month. Even the perennial favourite, the Toyota HiLux, delivered outstanding sales results, up just shy of 50%. It was a new March record for this particular model as well, which underscores just how popular it has become over the years.

Unsurprisingly, dual-cab utes are the nation’s favourite type of car, with not only the HiLux and Ford Ranger featuring prominently, but the Mitsubishi Triton and Isuzu D-Max also on fire.

SUVs made up the majority of the rest of the list, with the Toyota RAV4 sliding into third position, the Mazda CX-5 trailing one spot in fourth, plus the ever-reliable Toyota LandCruiser and Nissan X-Trail also recording huge sales increases. 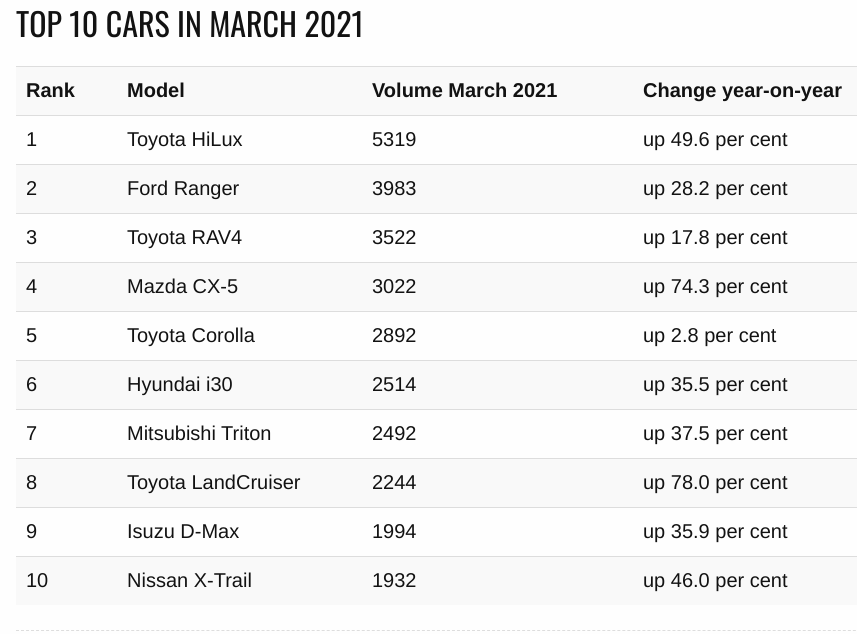