New car sales posted another strong performance last month, delivering their fifth consecutive increase when compared against figures from a year ago. However, were it not for supply issues constraining dealers, the results would have been even better.

Even still, Australian Automotive Dealers Association (AADA) CEO James Voortman has expressed some caution, arguing that “we need to look at the longer term trends because 2020 was effectively a write-off, so right now everything is going to look good against last year”. He also went on to say that “many cars reported as sold in March were in fact orders placed months ago, and were simply delivered in March when they arrived”.

March is historically the second-biggest month for new-car sales, largely due to the end of the Japanese financial year driving a sales bonanza among dealers keen to clear stock.

In true fashion, the result was a strong showing, with 100,005 new cars reported as sold across Australia last month. This represented a 22.4% increase compared to the same month last year, however, the pandemic had just started to take hold and ultimately weighed on the market.

As mentioned earlier though, the takeaway is that underlying interest was even better, so had it not been for a shortage of parts that led to delays accessing stock, dealers likely would have fared better. 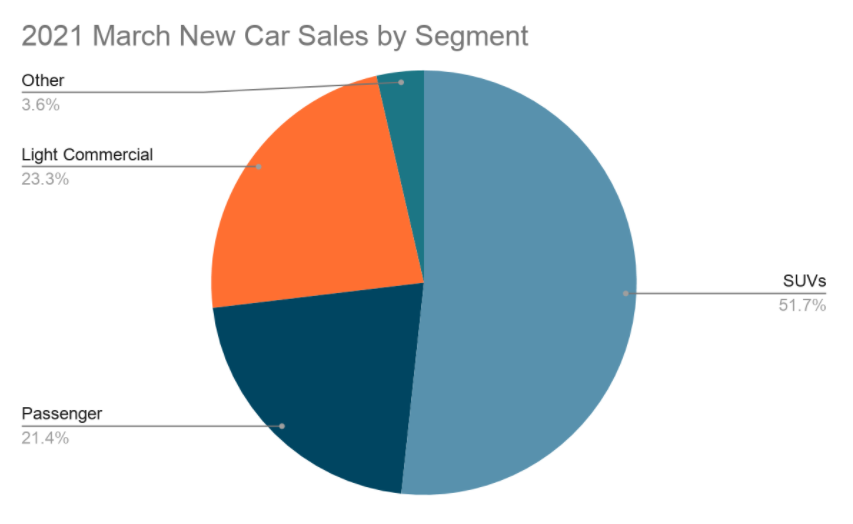 The biggest development in March was that light commercial vehicles surpassed passenger vehicle sales, and quite comfortably as well. Passenger vehicles have been slowly falling out of favour among Australians as the humble SUV and ute take over.

The shift has largely been driven by the private buyer, with sales among this category leaping 26.4% and now making up a 51% majority of the entire market. In comparison, business and fleet buyers bought 15% more cars than this time last year, rental sales spiked 55.7%, but sales to the government sector slumped 21.7%.

These observations were largely across the board as well, with each state and territory notching up a sales increase bar the ACT, where a strong base last year ensured that this year’s result was lower.

Stay tuned for Part 2 of our review into new car sales for March 2021, covering vehicle makes and models.