Toyota retains its stranglehold on the new car market, with 21,200 units sold during June. This is higher than the combined total of the next two best sellers, Mazda and Hyundai, whom recorded sales of 10,806 and 10,001 respectively. All three were off the pace when assessed year-on-year, Mazda the worst hit down 13.3% compared with June 2018 sales.

Among other major car brands, the majority recorded negative sales growth in the mid-single digits or low double digits. However, there were two notable exceptions. Holden’s demise has become a sorry sight, its sales dropping 34.8% last month. With little fanfare surrounding the company’s newly revised and streamlined line-up, the times have certainly changed. Further demonstrating this is the grace with which Kia has performed during 2019, its June results showed sales growth of 1.9% to 7,200 units - the only positive story among brands selling 2000 vehicles in the month.

For the first half of the year, Toyota held 18.9% market share with 104,773 sales. While its share of the market is higher compared with the same point in 2018, the Japanese auto-maker’s sales have actually decreased by over 7,000 units in that time. That was still better than Holden, which despite starting from a far lower base, saw sales slide by more than 8,000 units from 32,614 in the corresponding period the year prior. Kia and Mitsubishi bucked the trend, albeit the growth was no more than a few hundred vehicles each. Nevertheless, their market share grew from 5.2% to 5.8%, and 7.2% to 7.9% respectively.

The Mitsubishi Triton and Mazda 3 struggled to make advances last month, as both of the highly popular vehicles fell out of favour with budget conscious motorists. In the end, comparable monthly sales for the duo were down 31.2% and 23.9% respectively.

Once again however, Kia proved the exception to the trend. Its well-regarded Cerato model stormed up the charts into sixth position, thanks to sales growth of 14%, which meant 2,832 units were purchased last month. 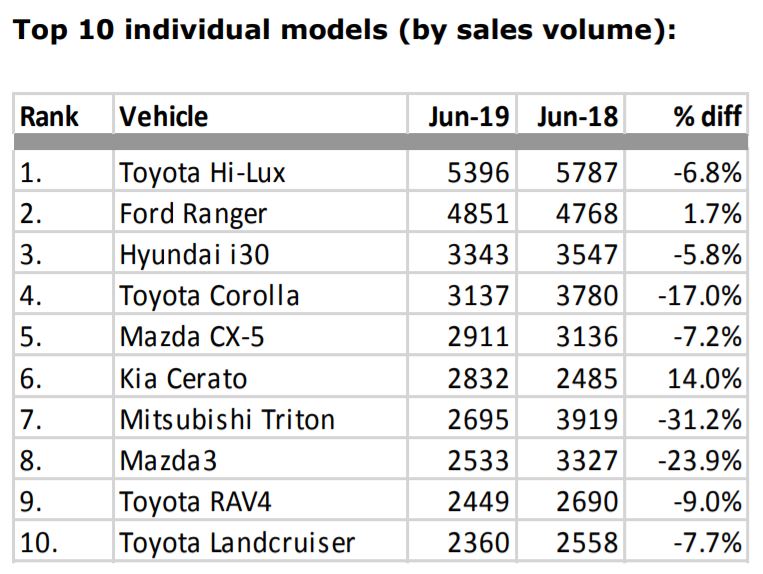