For all the enthusiasm that greeted the industry at the start of the year, things have quickly soured as a series of headwinds prove difficult to overcome – the most recent of which, could be luxury car taxes at a state level. Never mind the record low interest rates, which make it more affordable than ever to purchase a new car, broader consumer sentiment is near its worst levels for some time.

During June new car sales declined by a lofty 9.6% versus the corresponding month in 2018. If the headline result wasn’t bad enough, it also translated to the worst June result since 2012, when the market was still coming out the back end of the GFC. In total, 117,817 vehicles were purchased last month, down from 130,300 the year prior. It also marks the 15th month in a row in which sales have posted a relative drop.

Across the first six months of the year, total new car sales are tracking well below the volume sold in the first half of 2018. Last year, sales nudged over 600,000 units in the first two quarters, whereas this year, they are down 8.4% to 554,466 units. At a geographical level, effectively every state and territory has been feeling the pinch, with NSW, Queensland and Victoria worst affected. In Tasmania results showed an increase in sales by one solitary car. That’s right, the only saving grace for the figures was one more car being purchased in Tasmania across the last six months. 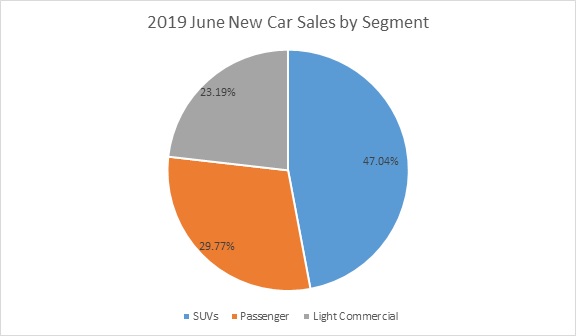 SUV sales edged closer towards that significant milestone of 50%, with June’s tally accounting for 47.04% (once heavy vehicles are excluded). The strength may seem like a bright spot in an otherwise disappointing field of results, but it’s worth remembering these sales are taking away from other segments. Nevertheless, medium SUVs are the most popular category, accounting for over a third of sales in the SUV segment. Turning to the passenger vehicle segment, and small cars just topped the 50% barrier, which is no surprise given the longstanding trend for this category, buoyed by more affordable cars.

Across the board, most segments faltered during June, however apart from SUVs, which got a lift from new sales of the Nissan Patrol, it was only upper-large passenger vehicles plus vans and busses that showed any sort of growth. Even then, the low-volume rise was led by particular new models that aren’t expected to carry this growth too far into the future.

Finally, for the first half of the year, it was medium SUVs that just edged out 4x4 pick-ups as the top-selling sub-category, posting 88,066 sales versus 87,937. Both were still down on last year though, falling 2.5% and 1.2% respectively.

Stay tuned for Part 2 of our review into new car sales for June 2019, covering vehicle makes and models.