In our first piece covering May’s new car sales, we looked into overall sales across the industry as well as a breakdown by vehicle segment. This time around we’ll focus on how different makes and models fared last month.

No surprises at the top of the charts, with perennial market leader Toyota solidifying its position at the top. In total, the Japanese manufacturer reported 21,156 vehicles as sold, accounting for more than 20% of all new cars across the market.

The next-best results were those from Mazda and Kia, with 10,554 and 7,124 respectively. It is just the second-time in history that Kia has made it into the top three best-selling brands, representing a phenomenal achievement for the auto-maker.

Recent favourite MG slipped out of the top ten for the first time, with interest instead flocking to commercial vehicles from the stables of Ford, Nissan and Isuzu. This aligns with the rush before EOFY, but as we have said previously, the multi-month stock delay across the industry means most of these cars were ordered well in advance of the lead-up to the end of financial year.

It’s also worth noting that just one out of the top twenty-five car brands by sales recorded a year-on-year sales decline, with Honda being the name to slip. That comes as the company prepares to move towards a fixed-price agency model from July.

It was a short-lived reign at the top of the charts for the Ford Ranger, with the Toyota HiLux retaking the lead as Australia’s favourite new car last month. As it stands, the HiLux is also looking poised to take out another annual sales win, with the ute some distance ahead of the Ranger, which did manage to outsell its Japanese peer in the 4x4 segment.

The frenzy and attraction towards utes was replicated right throughout the top ten, with four utes among the top seven names. What’s more, dual-cab utes are the favourites across the market, spurred on by an army of tradies who appreciate their versatility for work and weekends away.

SUVs also continue to hold a dear position in the minds of new car buyers across the country, with the Toyota RAV4 the pick of the bunch in terms of sales. Meanwhile, it’s a slightly different story for passenger cars, with just the Toyota Corolla and Hyundai i30 sneaking into the list, despite being leaders across the entire market once upon a time. 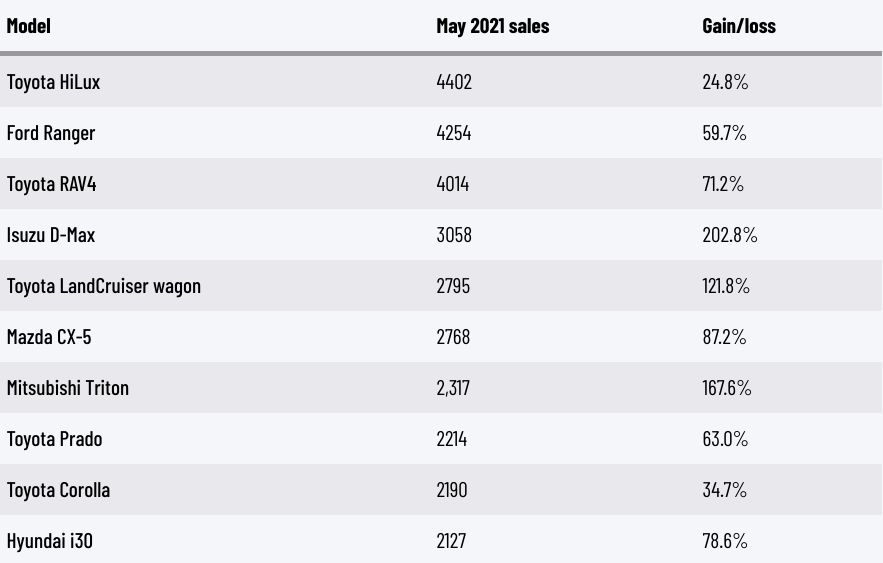