Although the results for May were always going to be a marked improvement compared with a year ago, the numbers certainly surprised to the upside, almost setting a record in the process.

That came as stock shortages continue to hamper the industry, with sales delays spanning many months on the back of issues for manufacturers sourcing semiconductors.

Commenting on the state of the market, Australian Automotive Dealer Association (AADA) CEO James Voortman is urging new car buyers to act quickly, saying they should “get in the queue now because the stock situation changes daily.” With delivery times being pushed back consistently, the message is very clear that waiting will only lead to further disappointment.

With a total of 100,809 new cars reported as sold last month, that was the second-best May result on record. Coming in 68.3% higher than last May’s dire result in the middle of lockdowns across the country, pent-up demand has certainly played its part in driving a recovery across the new car market.

With the economy going from strength to strength, including employment levels now reaching pre-pandemic levels, buying sentiment has been particularly strong. Falling just short of the all-time May record of 102,901 set in 2017, last month’s result still came in 3.7% higher than the five-year average for May in the years leading up to but excluding 2020.

On the back of the result, there are now two months this year where we have seen more than 100,000 cars reported as sold, setting up the industry for a good chance at cracking the million mark by the end of the year.

With sales now showing seven months in a row of positive growth, year-to-date sales total 456,804. This is an increase of 37.5% versus the prior corresponding period last year. 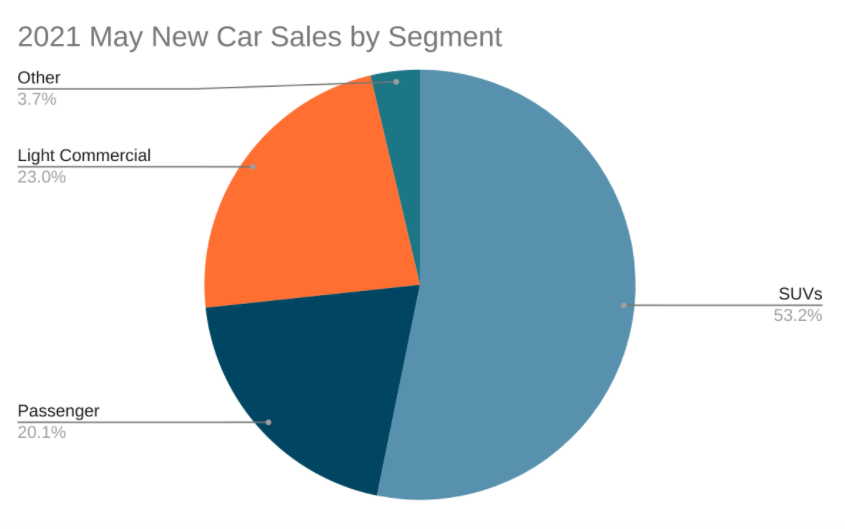 In one of the lowest results in some time, passenger vehicles represented just 20.1% of all vehicles sold last month. Considering the sales numbers are mainly tied to a backlog of orders from months ago, that means May’s results won’t show as much of a skew towards commercial vehicles as might be typical this time of year, meaning there is a possibility passenger vehicle sales could still dip further.

Electric vehicles totalled 436 units last month, with the number excluding sales of Tesla vehicles. In contrast, hybrid vehicle sales were 7,105 units, which was an increase of 117.3%.

Stay tuned for Part 2 of our review into new car sales for May 2021, covering vehicle makes and models.