It was a mixed affair for car brands across the market last month, with five of the top ten names seeing a decline compared with a year ago, and some auto-makers also delivering surprising results.

Arguably the biggest result wasn’t Toyota, which has become a perennial leader at the top of the charts. Rather, Ford’s result was a standout, with the brand leaping to third place for monthly sales on the back of its best performance in four years. Although it’s still a long way short of a top three finish for the year - which last occurred back in 2011 - the brand is on track for a strong result.

Next in line were Kia and Hyundai, with the former outselling its sibling brand for the second consecutive month, although it still trails on a year-to-date basis.

Honda’s slump continued last month, with the brand now down in 23rd place among the best-selling makes on the market. That is in stark contrast to its glory days where it regularly placed in the top ten brands, and follows on from the company’s decision to move to a fixed-price agency model.

Elsewhere, Chinese brand MG made it into the top ten for the fourth time, with its peer in Great Wall Motors Haval recording an all-time best of 14th place. Meanwhile, luxury brands Mercedes-Benz and BMW were bumped out of the top ten.

For just the third time in history, the Ford Ranger beat the Toyota HiLux thanks to 6,058 sales, and in the process it took top honours last month as the best-selling vehicle across the nation. It was also the Ranger’s best month on record, and alongside the Ford Everest, the duo accounted for about 75% of the blue oval brand’s total sales.

Both the Ranger and HiLux were ahead of the impressive Isuzu D-Max, which posted its own record by claiming outright third position as the best-selling model last month. WIth 3,167 units reported as sold in June, the D-Max ensured that there were three utes occupying the podium.

Focusing on SUVs, and the Mazda CX-5 was the most-popular name in that category, displacing the Toyota RAV4, which recorded its lowest monthly result in 2021 thus far. In May, the RAV4 also fell behind the Prado, indicating some easing demand for the popular hybrid SUV, even though it is still the best-seller when looking at the broader picture for the year.

Finally, the Kia Cerato wrestled its way back into the top ten for its first appearance among the leading names since February. 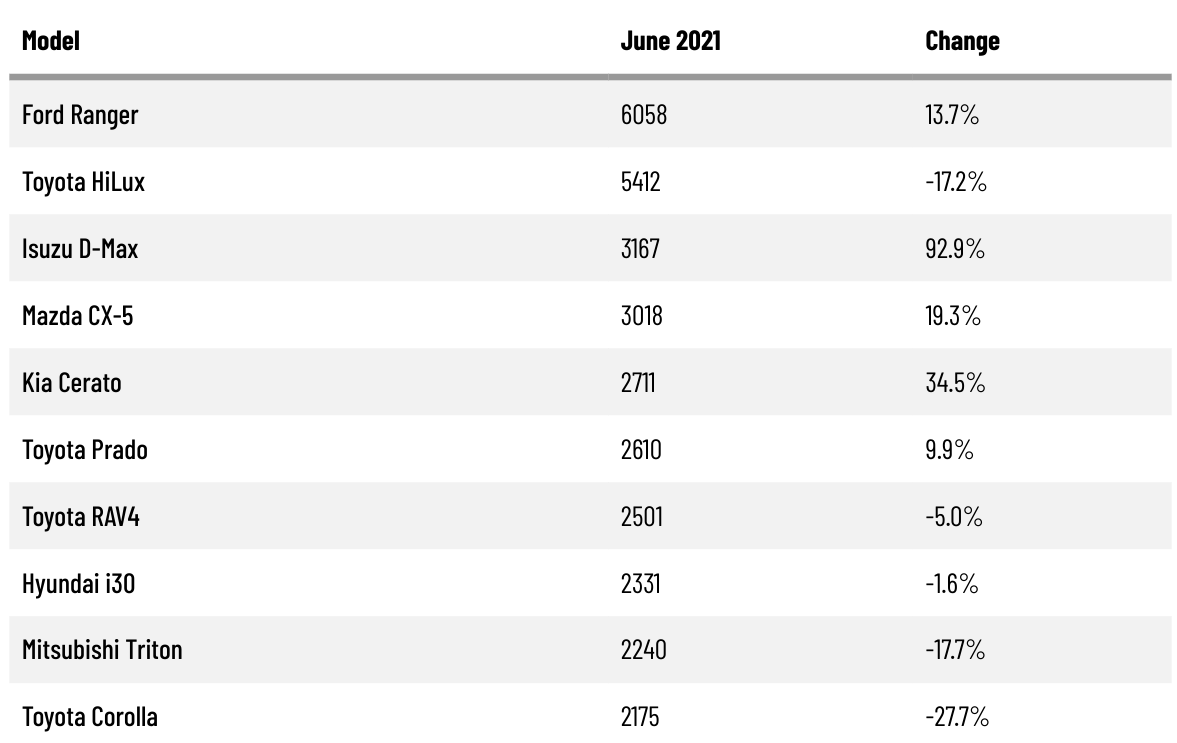