The traditional strength of June meant that last month’s results were buoyant compared with what we’ve seen in recent times, however, there are telltale signs of struggle beneath the surface.

Delivery delays arising from semiconductor shortages continue to plague the industry, with a number of manufacturers hamstrung by matters that are seemingly out of their control.

CEO of the Australian Automotive Dealer Association (AADA) James Voortman was on record as saying that “almost every brand continues to struggle to get the supply of new cars and there are many customers who have already placed an order and are waiting for their car to be delivered.” That could lead to a surge in sales over coming months, even though orders have been sitting in the pipeline for a while.

Although last month’s result was the strongest since the pandemic first hit our shores, and the eighth month in a row where sales have risen year-on-year, by June standards, the result did fall somewhat flat compared with years gone by.

In total, there were 110,664 vehicles reported as sold throughout June, which was up just 0.4% on the prior corresponding period, which had already been dampened by the effects of lockdown. A year later, however, it was also telling that the impact of lockdowns was present once again, albeit not as much as broader supply issues for the industry.

The five-year average for the month of June prior to the pandemic was approximately 127,000 sales, which means last month’s result was considerably below the long-term trend. What’s more, compared with the record result of 134,171 sales from June 2017, the most-recent figure represents a decline of 17.5%. 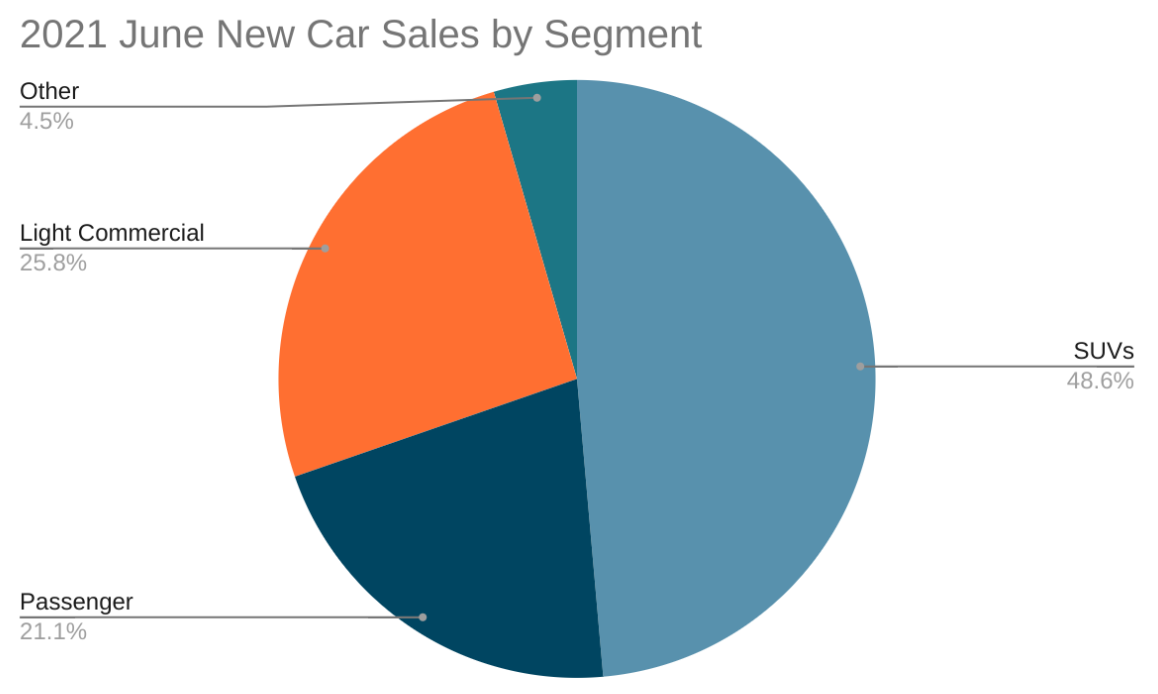 Light commercial vehicles took some market share from SUVs last month, increasing to 25.8% of all sales. That came amid the end of the financial year rush for businesses, with tax incentives in effect up until the end of June for Financial Year 2021.

There is growing interest for electric vehicles across the country, with sales numbers continuing to climb. In the case of pure electric vehicles, 526 deliveries last month represents an increase of nearly 200%. More importantly, however, hybrid is the prevailing choice in this category, and its growth was spread across a significantly larger base. Hybrid sales gained 37.7% to reach 5,842 units last month.

Stay tuned for Part 2 of our review into new car sales for June 2021, covering vehicle makes and models.

While June is one of, if not the biggest month for new car sales every year, the industry remains hamstrung by stock shortages and lengthy delivery delays that all but put a line through most EOFY discounts last month. At the same time, rising interest rates are also starting to have an effect on new car buyers, with sentiment shaken by the RBA&rsquo;s aggressive rate hike cycle. Speaking about last month&rsquo;s re...