As we’ve become accustomed to for what seems like an eternity, Toyota holds a commanding market leading position over all other brands. If the Japanese manufacturer ends this year as the best-selling car, that will be the 18th year in a row where it tops the charts down under. Last month, however, Toyota sales fell by 25.5% to 12,449 units, with its market share easing to 20.4% from as high as 26.5% back in April.

Meanwhile, Mazda occupied second place, posting 6,921 sales (-5.1%), followed some distance back by Hyundai, which recorded 4,525 new cars as sold. There was barely anything separating the latter from its sister brand Kia, which achieved 4,521 new car sales and saw the least impact to sales among any leading brand.

For the second month in a row, the new Toyota RAV4 SUV was the nation’s best-selling car. However, for the first time in Australian motoring history, a petrol-electric hybrid vehicle boasted the most sales of any vehicle.

That came as the hybrid version of the RAV4 represented over 90% of all sales for the highly popular model. In fact, with 4,405 sales, the hybrid variant nearly outpaced the entire market. While the majority of these sales relate to the company’s back-orders, it is nonetheless a positive trend and could allow its momentum to snowball as word of mouth spreads.

In contrast, the once unshakable Toyota HiLux recorded its sharpest drop in sales on record. Total sales numbers for the ute nosedived 66.9% to just 1,217 units, and for the first time ever, it was surpassed by the Mitsubishi Triton. The Ford Ranger remained popular, ahead of both peers, keeping it in pole position to finish 2020 as the second best-selling model on the market.

Elsewhere, passenger vehicle registrations were under significant strain, as sales of the Toyota Corolla shrunk 48.9%, sales of the Hyundai i30 collapsed 49.2% and the Kia Cerato recorded a more measured drop of 25%. 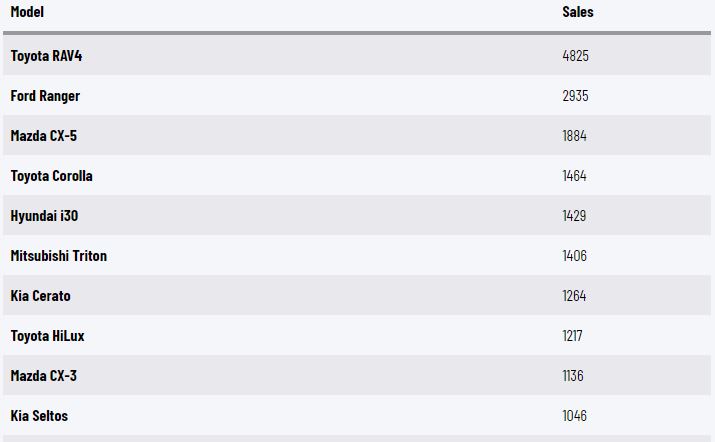