Although the new car market remained sluggish throughout August, there were some positive takeaways from the latest industry sales figures. That came as motorists and industry groups responded to the government’s stimulus packages.

Nonetheless, the circumstances in Melbourne proved a major challenge as expected, with FCAI chief executive Tony Weber citing that it was “particularly difficult for our members and their Victorian dealer networks under the current Stage 4 Restrictions, and this is reflected in the reduced sales figures”.

For the 29th consecutive month, new car sales across the industry decreased from their respective benchmark a year ago. In this instance, new car sales for August were down a whopping 28.8% compared with 2019, totalling just 60,986 sales.

The strong demand for vehicles in June and July also continued to weigh on stock levels available at dealerships across the country, with some stock destined for Victoria reassigned to other parts of the nation. The result for August was the worst for that month in 23 years, which continues a sombre trend seen in prior months where multi-year record low car sales have been posted.

With new car buyers unable to visit dealerships in Melbourne, sales across the state of Victoria dived 65.9%, leading to just 8,347 sales across the sub-market. The performance of other markets such as NSW, Queensland and South Australia also disappointed, down by low double-digit percentages. 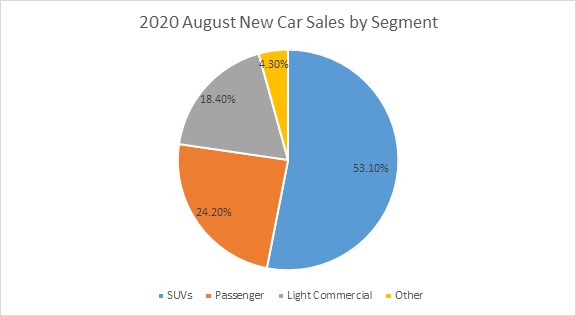 There was no clearer sign as to the shift in buying preferences than the leading models sold. Of the top 10, which will be covered in our follow-up article, four vehicles were SUVs, three vehicles were utes, and the remainder were passenger vehicles, which posted sharp sales declines. To think that once upon a time these numbers would have been all but unimaginable.

We’re also starting to witness some traction in next-gen vehicle types. Electrified vehicle sales soared 114% from August 2019 to reach 6,694 sales last month. This rise was led by hybrids, whereas pure electric vehicles have yet to indicate a clear direction in terms of sales trends.

Stay tuned for Part 2 of our review into new car sales for August 2020, covering vehicle makes and models.