Although the rest of the market was showing some signs of rust as stock shortages hammered home, Toyota was able to defy the odds and post its best September result on record. With a market share of 24.3% the Japanese brand sold 20,216 vehicles last month, up 56.3%, and positioning it for one of its best annual results in more than a decade.

As it stands, at the end of September the auto-maker is on track for its best result down under since 2008. While a great result, celebrations could be tempered by the fact that the company’s stock woes have only just taken hold, with waiting lists now well and truly the norm.

Sales for Mazda slipped, however, the car company was able to hold onto second place, ahead of Ford, Hyundai and Kia respectively.

A host of familiar favourites made up the rest of the top 10, including Mitsubishi, Volkswagen, Isuzu and Subaru, plus up-and-comer MG, which has set the scene alight this year. MG was just one of several Chinese brands that experienced significant growth, with Great Wall Motors and LDV also following suit.

Upmarket brands in BMW, Mercedes-Benz, Audi and Porsche all struggled last month, with sales down by at least double-digit percentages. The worst result was saved for Honda, however, with its fixed-price agency model leading to another dire result - this time, sales plummeted 44.8%.

For the third month this year, and fifth time in its history, the Ford Ranger secured top spot as the best-selling car. That means on a year-to-date basis the blue oval ute has cut the lead of the Toyota HiLux atop the charts, a name that has been a stalwart in recent years.

It is worth noting, however, the Japanese brand’s best-seller had plenty of support from its siblings at the top of the rankings, with Toyota taking out four of the top five positions. Apart from the HiLux, the top five included the Corolla, RAV4 and the Prado.

Further down the list, both the Isuzu D-Max and the Mazda BT-50 managed to make the cut, despite the fact the duo are effectively the same vehicle under the surface. Mitsubishi’s ASX SUV was also a favourite, while the Hyundai i30 and Toyota Camry lent some support to a struggling passenger vehicle segment. 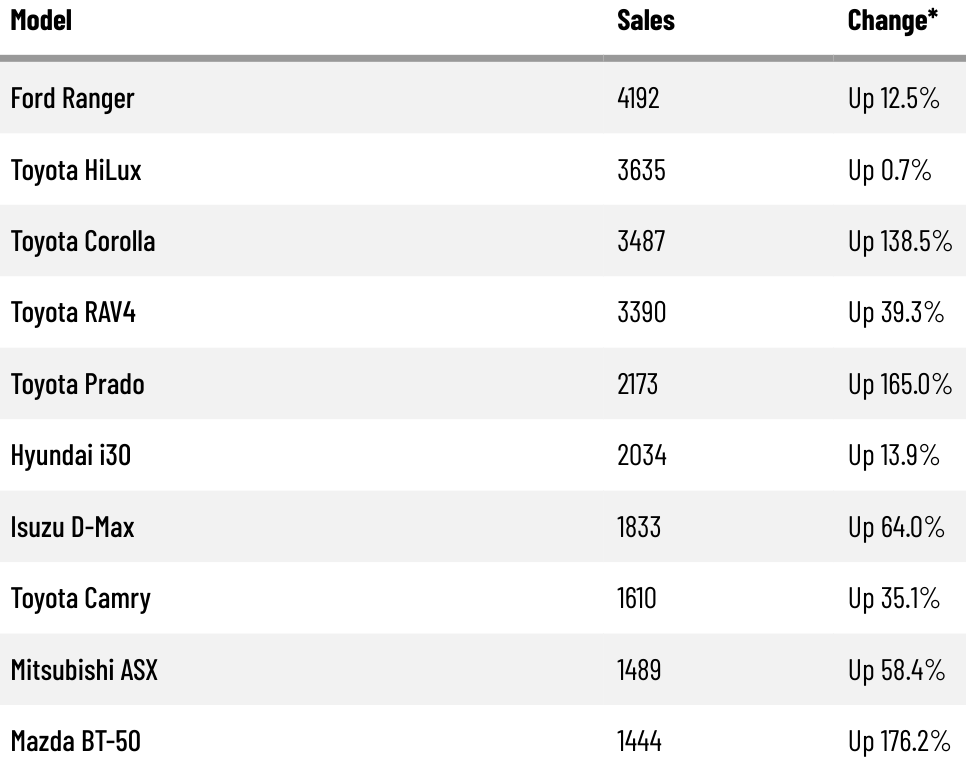