With the industry rebound finally coming to fruition, there were success stories for various brands last month.

First, Toyota delivered its best monthly result since 2017, with 23,204 new vehicles reported as sold in November. This was 36.9% higher than the same month last year, a remarkable feat, and something that enabled the nation’s best-selling brand to narrow the gap for its year-to-date sales to be down just 3.8% on 2019.

Next, in second position, Mazda had a booming month, recording 9,053 sales. This was year-on-year growth of 46.8%, delivering a significant windfall for the company.

Coming in third, Hyundai had a quieter month, with sales only 1.2% higher than the prior corresponding period to reach a total of 6,903 units.

Most of the other brands had gains as well, with the exception of Mitsubishi, down 20% due to supply issues with its Triton ute, as well as Nissan and Volkswagen, which saw a decline of 6.3% and 16.4% respectively.

In news that won’t surprise anyone, there was only one car that stood a chance at topping the charts last month and that was the Toyota HiLux. Adding to the frenzy was an updated model that sparked interest. The HiLux is now all but certain to become the best-selling car in the Australian market for the fifth consecutive year, an achievement that places it amongst the most successful vehicles down under.

Among the other names on show, the Toyota LandCruiser and Toyota Prado had their best monthly sales results on record, showing that Australians can’t wait to get into the outdoors in their SUVs. Further highlighting this trend was the fact that last month’s sales of the Nissan Patrol reached a seven-year high, dating back to the car’s initial release. 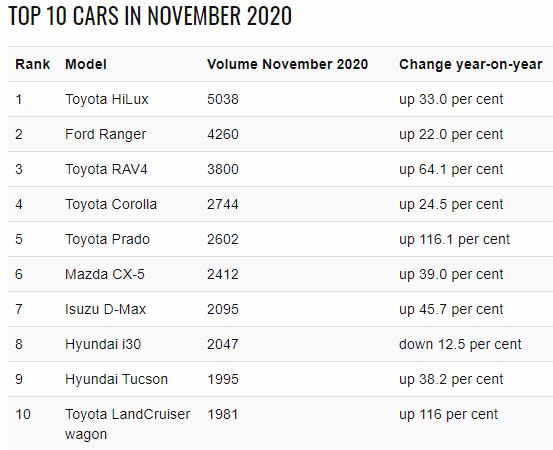