There is optimism in the air once again after the new car industry managed to deliver another positive month of sales. It brings the streak to three months now, following what was a dire period for the industry amid COVID-19, and the effects of more than two years of toil across the industry when sales were sliding month after month.

Although the data is a welcome change from what we’ve seen in recent times, the Australian Automotive Dealers Association (AADA) is still approaching the situation with caution. Its CEO was on the record as saying that “the industry is growing off a very low base after a period of falling sales which lasted for 31 months.” Pent-up demand and a backlog of orders have also been cited as factors driving the latest set of numbers.

The new year kicked off with a total of 79,666 new car sales, a number that was 11.1% ahead of last year’s comparable figure from the same month.

With rising demand and production issues hurting supply, there have been ongoing stock issues in showrooms across the country, something that otherwise weighed on what could have been an even better result. Unfortunately, this has led to waiting times for various models, some of which are quite significant, and has also meant that the negotiating power has shifted away from buyers for the time being.

Underlining how broad the rebound in the market has been, year-on-year sales growth was observed in every state and territory across the nation. The range of growth was between 1.9% and 38.7%. 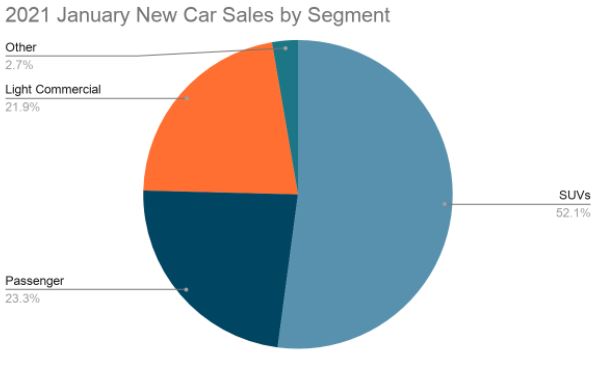 The domination of the SUV segment at 52.1% market share is hardly surprising, however, light commercial vehicles are quickly closing the gap to passenger vehicles. This comes as an ever-growing number of Aussies step into utes, particularly the market-leading Toyota HiLux and Ford Ranger.

Last but not least, the market saw 47,356 petrol-powered vehicles registered in January, a number that is 3.8% higher than a year prior. Meanwhile, diesel sales came in at 24,662 diesels, up 19.1%, led by utes. Hybrid sales continue to surge, rising 51.1% to 5,247. Large growth figures for electric vehicles and plug-in hybrids are good to see, however, still represent a negligible portion of the market.

Stay tuned for Part 2 of our review into new car sales for January 2021, covering vehicle makes and models.