With overall new car sales falling by double-digits, it was no surprise to see most of the major car brands record a significant slide in sales. Even the clear frontrunners of Toyota, Hyundai and Mazda were hit hard.

The worst of these was Mazda, with the company’s entire line-up struggling to gain traction amid higher price-points and price sensitive motorists. With its sales declining a monumental 32.1%, this was enough to see Hyundai overtake it into outright second place.

Elsewhere, declining sales were mostly in the mid-teens. Holden has shown no sign of abating its alarming sales drop, with another 18.1% decline. Ford, which has enjoyed a slightly better time of late, wasn’t able to arrest a 17.5% fall as its key models came under pressure.

Despite a downbeat market, Kia and Nissan managed to increase their sales compared with August 2018. For Kia, it has become a somewhat recurring trend, as it has repeatedly captured sales from other car brands on account of sharp prices. On Nissan’s front, the Qashqai SUV has helped it lift overall new car sales by 2.2%.

The Toyota HiLux led the way for individual model sales once again, but in what serves as somewhat of a barometer for the rest of the market, units registered to new buyers slumped significantly. Ford’s Ranger and the Toyota Corolla were next in the line-up, albeit down 9.5% and 5.6% respectively.

Climbing sharply higher were the Hyundai i30 and Toyota RAV4, which leapt 21.1% and 19.1% higher. Given the recent release of these models, it is apparent that new car buyers are appreciating the upgrades in these new iterations. These two vehicles were the only ones to post noteworthy increases, albeit sales for the Mitsubishi Triton did edge higher by 0.2%.

As alluded to earlier, the worst results were saved for Mazda’s two prominent best-sellers. Sales for the Mazda3 and CX-5 were sharply lower by 32.7% and 30.9%, with each model facing increased competition from more affordable options on the market. 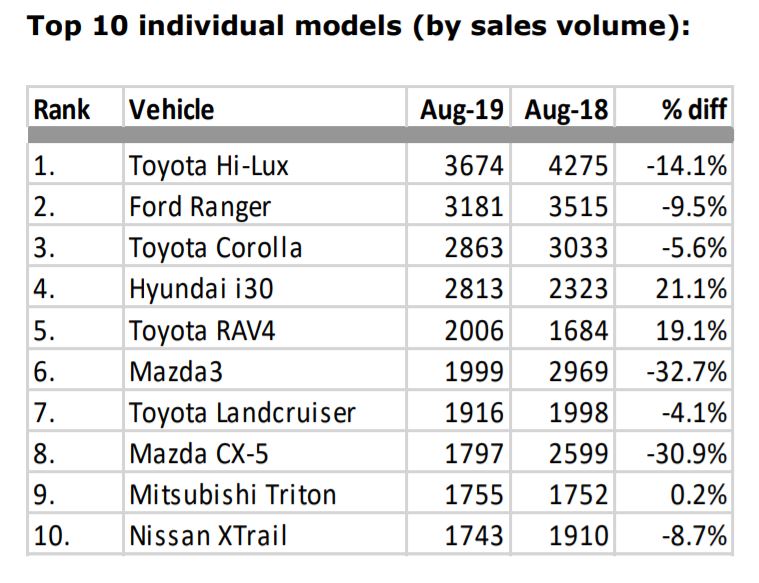