With a slightly better performance for new car sales during July – notwithstanding the numbers were still down year-on-year – there was some optimism heading into August. That hope was short lived however, as reforms to lending criteria have effectively dried up successful car loan applications. It comes at an ironic time, with rates set to drop even further beyond their current all-time low. If conditions at the moment are inhibiting consumer sentiment, imagine when rates are much higher.

In August, new car sales totalled 85,633 units. This number is 10.1% down from the comparable month last year. More worryingly however, the result is the worst one for the month of August since 2010. Back then, just 81,122 new cars were sold.

On a day-to-day basis, it means that there were 358 less new cars sold to Australian motorists each selling day across August for both years. It is now 17 consecutive months in which Australian new car sales have declined against the prior corresponding month.

At the same point last year, new car sales were 8% higher than where they are now. With a total of 723,823 vehicles registered year-to-date, it makes for sombre reading. The pain is being felt across the board, with Tasmania the only state to otherwise defy the trend and post an increase in sales throughout 2019. 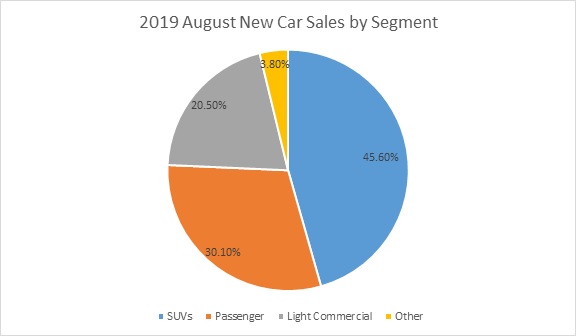 Despite their consistent strength from month to month, SUV sales took a rather large backwards step during August. Sales for this segment were down by 5.4% compared with August 2018, which weighed on their contribution to overall sales. Nonetheless, this is the leading vehicle category, with more and more car brands turning to the format to bolster their margins amid slumping sales.

Stay tuned for Part 2 of our review into new car sales for August 2019, covering vehicle makes and models.