As pessimism takes hold of the new car industry, the penny has dropped that the lull in sales across the board is anything but a short term hiccup. In fact, in some quarters it’s being pointed to as a sign that the economy is in no great shape. So with that in mind, just how did new car sales fare during September? Was there any sign of a rebound, or did the record losing streak continue into yet another successive month? Let’s look over the numbers.

After 18 months of consecutive data showing year-on-year new car sales have gone backwards, including multi-year lows like that mentioned above, it is pointing to a dire outlook. Between the comparable September periods, 265.4 fewer vehicles per day were sold this year.

Comparing year to date totals, and the entire new car industry is sitting at a slightly worse position than the individual result from September. As at the month’s end, “a total of 811,464 new vehicles were sold, a decrease of 69,541 vehicles, or 7.9 per cent, on the same period in 2018”. Results are down in every geography year to date, and all but one last month, including Tasmania (-21.6%), where the state had previously held up well. Sales in New South Wales were lower by 10.6%, and Victoria declined 7.6%, however the exception was South Australia, where sales leapt higher by an impressive 16.2%. 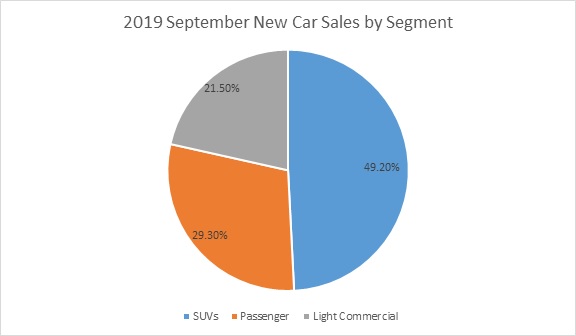 In the key categories, passenger cars and light commercial vehicles saw notable sales decreases last month compared with September 2018. The former plunged 18.3%, while the latter dropped 5.4%. On the other hand, SUV sales inched higher by 1.1%. The fact that SUV sales performed slightly positively was the main reason that overall sales didn’t otherwise decline by a higher proportion, like in August.

As far as market share, over 75% of light commercial vehicle sales were comprised of 4x4 pick-ups. If you include 4x2 models into the equation, the total contribution to that segment is almost 90%. Elsewhere, in the SUV category, small SUVs under $40k accounted for 28.4% of all SUV sales, closing in on the medium-size category under $60k, which remains out in front at 34.1% segment share.

Last but not least, private motorists and businesses remain far and away the leading buyers taking to the market, with sales contributions of 37,797 units and 36,629 units respectively.

Stay tuned for Part 2 of our review into new car sales for September 2019, covering vehicle makes and models.