After 2018 ended on a dour note, dealers were hoping for things to turn around in January. In what is traditionally one of the best months for year-on-year growth in vehicle sales - since run-out models from the year prior are usually sold at steep discounts - the results have heightened concerns about an economic slowdown.

New cars sold in January totalled 81,994 units, down 7.4% on the same month last year. The plunge in growth ensured the worst start to a year since 2012, a period in which the country was only just coming to terms with the Global Financial Crisis. It also marks the 11th consecutive month in which vehicle sales have taken a backwards step.

Many analysts are now starting to point to the drop in sales as another factor that supports slowing growth in Australia and the need to further cut interest rates. With credit already having tightened, and a housing market that is still trending down, there are no shortage of concerns for new car buyers to contend with. NSW and Victoria led the decline, and among all States and Territories it was only the Northern Territory which posted an increase in sales for January. 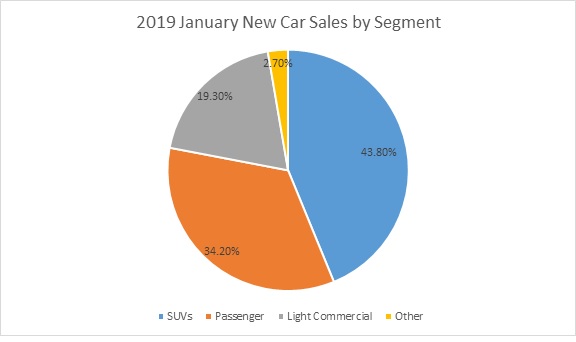 SUVs (43.8%) and passenger vehicles (34.2%) were slightly higher than their respective averages for 2018, which could be explained by seasonality as far as market trends. January is usually a slow time of year for many businesses, where registrations for light commercial vehicles are seasonally weaker. Across the main segments, over the same month last year: passenger vehicles declined by 12%; SUVs dropped by 5.1%; and light commercial vehicles fell by 5.8%.

If looking further into the data, it’s apparent that company fleet operators stepped out of the market, as sales were down 9% on a comparative basis. Surprisingly however, it was private buyers who also curbed their interest in new cars, with comparable sales down 12%. This was the biggest factor that influenced overall sales. Offsetting this were increases in sales to rental car businesses and government agencies, which likely would have been swayed by discounts on clearance stock.

Stay tuned for Part 2 of our review into new car sales for January 2019, covering vehicle makes and models.