The latest data for April suggests that the new car industry is showing no signs of shaking off its lacklustre start to the year. But with an election now out of the way – considered one of the obstacles to date - the question remains, will sales fare better in the coming months?

During April there was an 8.9% reduction in new cars sold compared with the same month in 2018. In total, 75,550 cars were purchased during the month, as opposed to 82,930 a year prior. Not only was this the 13th month in a row where sales declined, but it was the lowest number of cars sold during April in eight years, dating back to 2011.

After four months now, year-to-date sales volume across the nation is lagging by 8.1%, putting it on track for the worst result in some years. If things are due to turn around it may hinge on the Reserve Bank of Australia lowering interest rates, as expected, which could act as a catalyst to prop up the housing market and also make it cheaper to obtain financing for new cars. Whereas South Australia and Tasmania had previously been the only two states bucking the trend, it is now just the latter which has positive year-on-year sales growth. 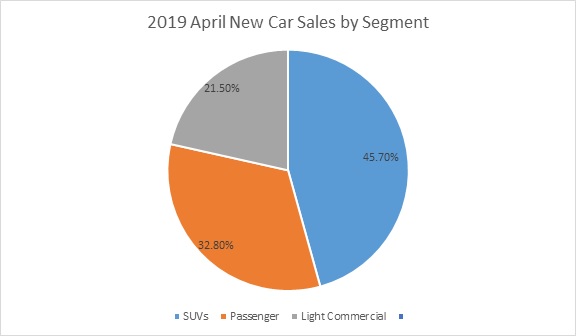 Our love for SUVs continues to shine through in the monthly sales figures, with the category now a clear runaway leader compared to the other two major segments. In fact, it is inching closer towards representing half of all sales, which would be a significant milestone if achieved.

If you look closer into light commercial vehicle sales, the most popular ones are in fact 4x4 pick-up utes, so that ties in with our fondness for 4x4 SUVs as well. In terms of the major buyers keeping the market ticking over, the breakdown of leading parties was as follows: private buyers 43%, businesses 41.6%, rental companies 7.7%, and government departments 3.9%.

Stay tuned for Part 2 of our review into new car sales for April 2019, covering vehicle makes and models.