In the week ending Sunday, May 9, PriceMyCar recorded 2,340 new car enquiries across all members. This was one of the best week-on-week performances we have seen in some time now, with the growth representing an approximate 8% surge in dealer connections.

The move higher wasn’t something that took us by surprise as the last two weeks have been impacted by public holidays. Furthermore, signs of positive sentiment have been building across the broader industry as demand for new cars remains robust, and sales figures also point to resilience in the market.

Ahead of the Federal Budget tomorrow, consumers are also poised for another uplift in terms of support as the government is expected to spend big on the back of a better-than-expected deficit. This should flow through to consumer confidence and could be another tailwind for new car interest. 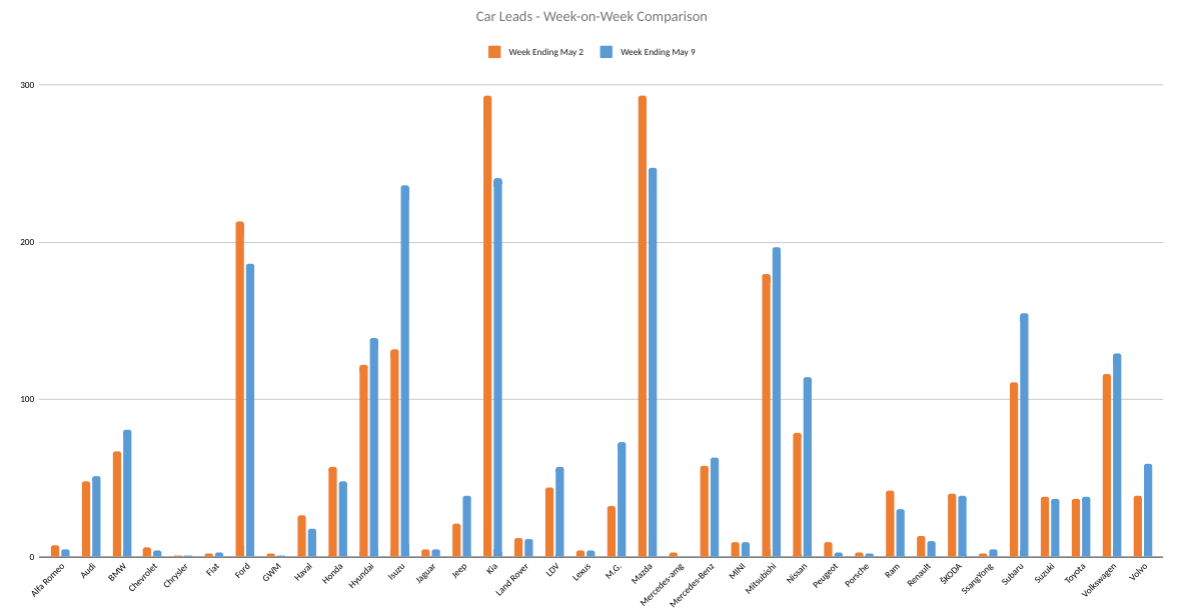 In a break from the trend of recent months, the broader rise in new car enquiries over the last week was not fuelled by either of the leading brands in Mazda or Kia. In fact, these two brands stumbled quite prominently compared with the week prior, with leads down by mid-teen percentage growth.

One of the major contributors to the strong gains in queries, however, was Isuzu, with new car enquiries for the brand soaring 78.8% to a total of 236. That was enough to cement third spot for the brand, not to mention, a new record for the brand via PriceMyCar. Isuzu has been one brand pitching directly to the tastes of new car buyers, offering a ute and SUV combo that are only becoming more popular with time.

Elsewhere, Ford also had a minor hiccup, easing into fifth place as it was outgunned by a modest uptick in Mitsubishi enquiries. There was also a lot of heavy lifting done by some of the second-tier brands including MG and Nissan, just to name a couple.