It was yet another case of one step forward and two steps backwards for the new car industry last week, with forward interest seeing a pull-back. With a total of 1,129 new car enquiries in the week ending May 8, 2022, down 13% week-on-week, the total number of dealer connections remains in a narrow trading range, having fluctuated between roughly 1,100 and 1,300 over several weeks now.

The headwind last week was a little more obvious than weeks gone by, where concerns were largely based on speculation at that stage. However, as of last week, the Reserve Bank of Australia increased the official cash rate for the first time in more than a decade, lifting the benchmark rate 25 basis points to 0.35%.

The increase was slightly bigger than expected, with most economists predicting either a 0.15% increase or no change until June. In addition, the central bank has also flagged that a number of additional rate hikes are ahead, so the days of ultra-loose monetary policy appear to be winding up quickly.

Given the majority of new car buyers rely on finance to buy a vehicle, higher rates are naturally an impediment for consumer confidence. At the same time, mortgage borrowers face higher repayments on their home, leaving less disposable income for other purchases like a new car. 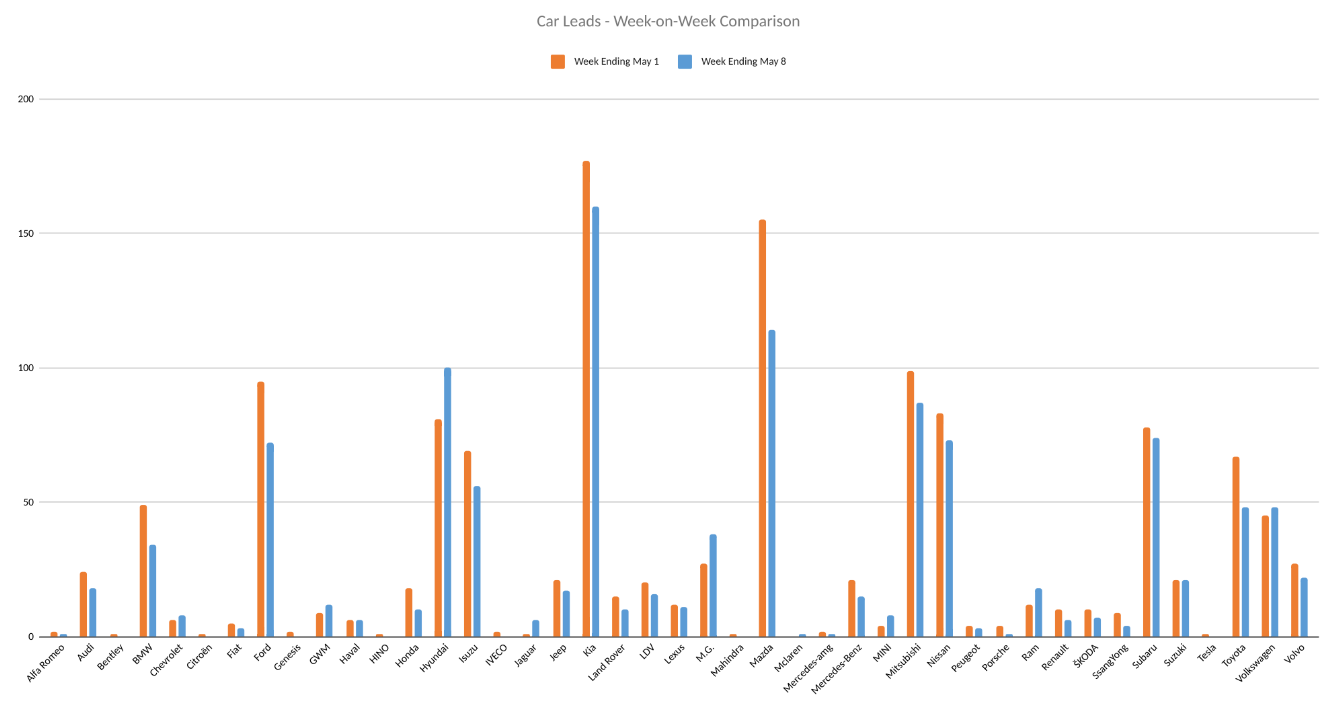 There was a notable drop in the number of different makes of car being searched for via the PriceMyCar platform last week, with just 36 brands featuring across all inbound queries. In the preceding week, there were a total of 42 brands in demand, highlighting some of the low-volume brands might be on the outer as broader new car buying sentiment wavers.

Nonetheless, the top five brands retained their lofty pull over the rest of the industry, again representing 47% of all new car enquiries. That came despite a sharp fall in queries for the likes of Kia, Mitsubishi and especially Mazda. These brands tend to be oriented towards family buyers, so whether there is something at play here with the rate hike news and the pressure on families, remains to be seen.

Meanwhile, Ford and Nissan were turfed from the top five after lacklustre performances, the former seeing one of its lowest readings in months. In their place, Hyundai and Subaru were elevated into the list of the most-desired brands, with Hyundai delivering an impressive result that bucked the trend across the rest of the market.