After a stretch where new car activity has been underscored by subdued interest, there was finally a solid bump higher last week, with the total volume of new car enquiries received through the PriceMyCar platform rising by 43%.

With 1,614 dealer connections taking place in the seven-day period ending May 15, 2022, compared with just 1,129 the week prior, this is one of the strongest results we’ve seen since it became apparent the RBA would lift interest rates, and in the timespan the election was called. Momentum picked up towards the end of the week, with nearly 300 inbound enquiries recorded on the Saturday alone, one of the highest single-day figures we’ve seen in months.

It is not clear as yet whether this result is the start of a broader uptrend, with a couple of previous results providing false optimism. We expect the cost of living crunch, as well as the rate hike cycle will both prove headwinds for new car buying, but there is also likely to be less uncertainty out there now given most households are replanning their budgets amid greater awareness as to the position of the broader economy. 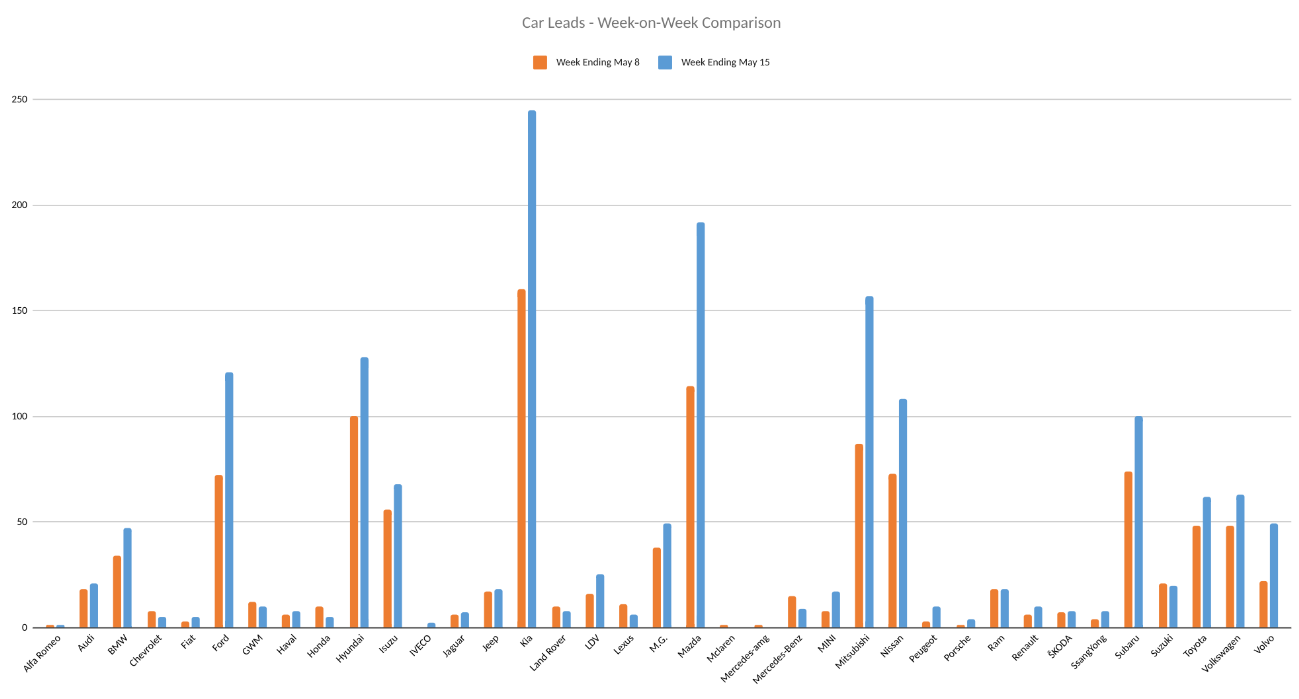 With just 35 brands representing the full suite of enquiries last week, the number was actually lower than the week prior, when 36 brands were featured. That difference came despite a large disparity in the overall number of dealer connections between the two weeks.

The weight of the top five most-popular brands grew from 47% to 52.2%, suggesting overall market sentiment is being driven by the frontrunner brands. Looking at the most sought-after brands, this is confirmed almost instantly by the significant growth in leads for Kia, Mazda, Mitsubishi and Ford vehicles, with each seeing more than 50% growth in terms of interest versus a week prior.

Elsewhere, Mercedes-Benz and Honda were two of the only brands that took a backwards step. Each brand has transitioned to a fixed-price agency model in recent times, something that has seen them pivot from chasing volume to margins instead.