In what is another concerning sign for the broader new car industry, dealer connections slumped yet again last week, this time tumbling by 21.4% versus the week prior.

As new car buying interest seemingly grinds to a sudden stop, the total number of enquiries last week were just 872, which is among the lowest weekly readings we have seen via the PriceMyCar platform since we launched the site.

At the moment, it’s hard to imagine the sudden about-face as being disconnected from consumer concerns about the emergence of the Omicron variant. After all, right up until that news surfaced, dealer connections were trending higher towards multi-month highs.

From our conversations within the industry, there may also be another theme at play here, since dealership visits have dried up somewhat since the start of the month. There are fewer end-of-year clearance plate deals being advertised at the moment since there is a shortage of physical stock for many of the most-popular models on the market.

While that could very well be weighing on overall interest, including online searches, we would still typically expect to see queries flowing through at a higher rate at this time of year, and after weekly connections approached 1,900 late last month. 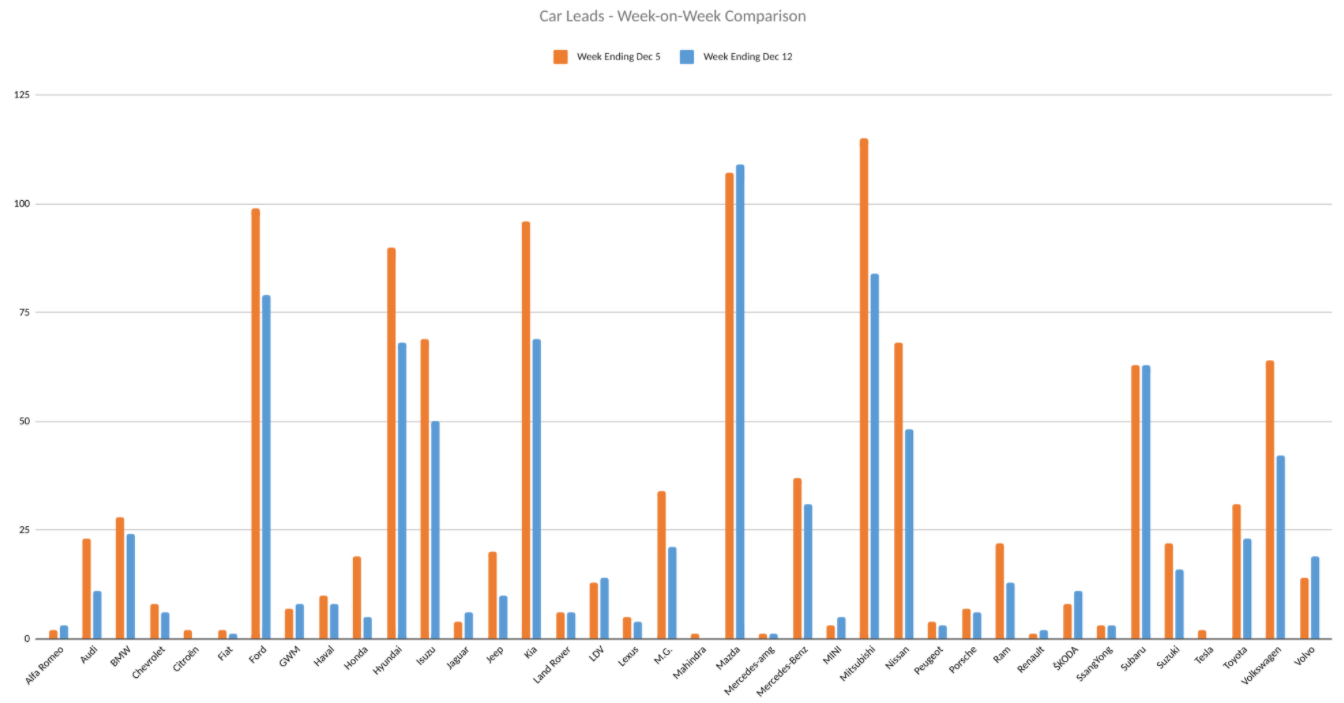 The only positive note to come out of last week’s data was the relatively robust interest in new cars from the likes of Mazda and Subaru, with dealer connections marginally up for both brands. There isn’t much to suggest why these brands outperformed others last week, especially as they have both pulled back from recent highs, but they feature some of the most-popular models available for sale, including the Mazda CX-5 and Subaru Forester.

Elsewhere, there were few brands spared any respite from the drop in action, with queries for Mitsubishi, Ford, Kia, Hyundai, Nissan, Isuzu and Volkswagen plunging. In some cases, these numbers dropped to their lowest level on record, even falling behind numbers at the height of last year’s lockdown-induced market-wide slump.

While we expect these numbers to turn around, it remains to be seen when consumer confidence will return, and more importantly, when supply is expected to catch up with a backlog of orders. After all, this will be necessary to fuel consumer sentiment over the mid-to-long-term.