Leading the way yet again in September was Toyota, with the Japanese car brand holding a dominant position over the market. The company’s stranglehold on the top position in the Australian new car market shows no sign of letting up, particularly with the impact that has been felt by other brands. Toyota sales fell 14.7% year-on-year in September, totalling 12,936.

In second place, Mazda recorded 7,000 sales, which was a similar percentage decrease as that of Toyota. Unlike the market leader, however, Mazda’s sales were predominantly driven by the CX-5, with that being the brand’s only representative among the top 10 best-selling car models.

Kia and Ford fared well in light of the broader market trend, with sales coming in broadly flat year-on-year. It was a different story for all the other names in the top 10, all sliding by notable margins, with Mitsubishi and Nissan taking a particularly big hit.

For the first time in three years, the Ford Ranger was back atop the charts as the market’s best-selling car last month, surpassing the Toyota HiLux, where sales were up a modest 7.3%. Prior to 2017, Ford’s only run as the manufacturer of the leading car on the market was when it pitted the Ford Falcon against the Holden Commodore in August 2005 – a sign of changing times.

Having broken the duopoly at the top of the charts for the last two months, the Toyota RAV4 SUV eased into third place after the backlog of orders placed earlier in the year were fulfilled. Even with that in mind, the model recorded a 41.8% year-on-year increase in sales.

There were significant double-digit slides in the next six best-selling cars on the market last month, with sales of the Mitsubishi Triton down a whopping 51.8%. One bright spot, however, was the reappearance of the Toyota Camry in the top 10, complemented by sales growth of 0.5%. 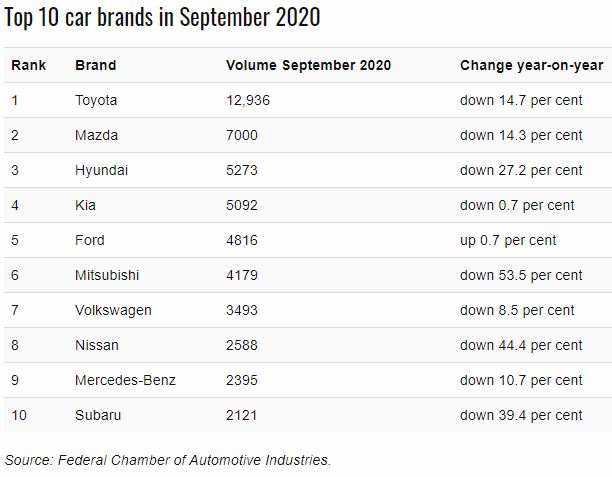