Although new car sales were under the pump again last month, there was one development that served as potentially good news for dealers across the country. With the government proposing to wind back restrictions relating to responsible lending legislation, the move could pave the way for greater borrowing opportunities that would help motorists afford new cars.

FCAI chief executive Tony Weber commented on the matter, noting: “Freeing up restrictions around financial lending will act as a real-world stimulus for Australian industry”.

The notion of a sales recovery across the new car industry continued to be out of reach last month, with sales sliding yet again. It was the 30th month in a row where new car sales lagged their comparable performance from the year prior.

For September, new car sales totalled 68,985, whereas the result from the same time a year ago came in at 88,181. The result was also the worst September result since 2002, and the fourth-worst sales result for any given month in 2020. Unsurprisingly, Victoria was the biggest drag on the market, with sales slumping 57.7% year-on-year, whereas the slide was more restrained in markets such as NSW and Queensland, even positive in the likes of the ACT, Western Australia and Northern Territory.

Year-to-date, new car sales reached 644,891 for the first nine months of the year. In comparison with 2019, that result is 20.5% lower, illustrating the extent that COVID and the pandemic has had on the market. 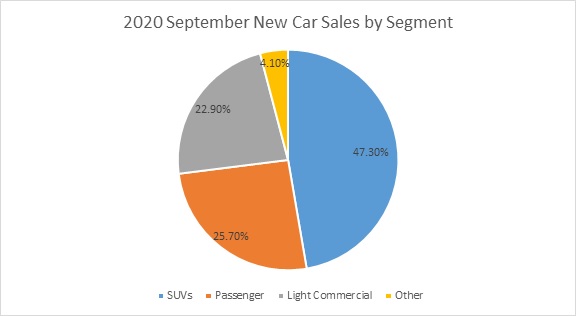 Amid the mining and construction boom happening in states that have effectively quashed COVID – Western Australia, Northern Territory and Queensland – the level of buying activity in light commercial vehicles has seen a lift. That segment of the market was still well off last year’s sales volumes, however, the month-on-month growth was higher than the segments for passenger vehicles and SUVs.

In terms of electrified vehicle sales, there was near-triple-digit growth in September, after more than doubling in August. September’s sales totalled 4,674 versus 2,351, with much of this driven by hybrid cars, particularly the popular Toyota RAV4 Hybrid. Pure electric vehicle sales only grew by 5.2% from a very low base.

Stay tuned for Part 2 of our review into new car sales for September 2020, covering vehicle makes and models.