With yet another plunge in new car sales, it was expected that the leading brands would shift around somewhat based on their varying performance. With that, three of the top ten selling car companies managed to grow their sales compared with the same month in 2018.

Mitsubishi leapt into second place on the charts on the back of a 17.9% jump in sales. Having posted 8,990 sales, the Japanese car company benefitted from an impressive month thanks to the all-new ASX SUV, as well as its well-regarded Triton ute. Also faring well, Mazda sales climbed 15.5% after a string of poor results in recent times. The result ensured that it overtook Hyundai on the sales charts, whereby sales for the South Korean brand fell 10.7%.

Once again Kia managed to increase its sales, this time by 2.5%. Although each positive result from the company has been small in nature, it is pointing to consistent demand for the brand. Subaru and Honda suffered a disastrous month, with sales plunging 26.4% and 24.8% respectively.

If you were looking for another consistent trend however, unfortunately it was the iconic Holden brand, which fit the narrative. The company’s local sales fell a mammoth 38.4% year-on-year for the month of September. With sales dropping to just 2,863 units, Holden no longer features in the top ten selling brands, and in fact, this particular result accounts for its worst since 1948. Concerning indeed.

Although the Toyota HiLux retains its familiar position atop the individual bestselling models, its sales fell by a significant 22.5% during September. This allowed its nearest rivals, the Ford Ranger and Mitsubishi Triton, to make strong ground as they look to overtake the market leader in the coming months. In fact, it was 4x2 sales that helped prop up the HiLux, otherwise in the 4x4 segment both the Ranger and Triton outsold it. Overall sales for the Mitsubishi Triton were up a remarkable 61.6%, largely on account of its sharp and competitive price positioning.

Mitsubishi’s other key models also made positive advances last month, with both the ASX and Outlander SUVs improving sales by double digit figures. Meanwhile, the Kia Cerato also posted strong gains, with its sales climbing 28.5% as it gains favour over once popular sedans from brands like Holden and Ford.

Finally, the Mazda CX-5 managed to turn around its recent sales plunge, with September’s advance of 56.4% coming as an unexpected turn of events. Given the volatility in Mazda’s sales this year, we’ll be watching closely to see if it can string together successive months of sales growth. 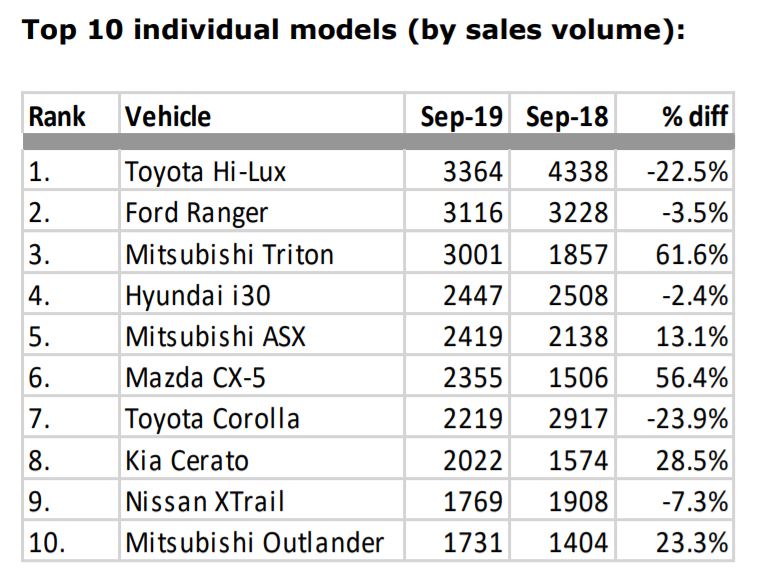