Although its market share tumbled quite substantially last month, Toyota was still a clear frontrunner on the sales charts, holding onto 20.6% market share. In total, the Japanese auto-maker recorded 15,395 sales across October, which was down 21.1% on the prior corresponding month last year.

Bucking the trend and posting positive sales growth for the month, Hyundai edged out its peers to take second place on the charts. Sales for the brand were up by 2.8%, coming in at 6,115 units, while the next-best brand was Ford, which saw sales ease 4.9% to 5,462 units.

Rounding out the top five were Mazda, with sales diving 30.5% due to supply issues with its SUVs, and Kia, shedding 8.5% of its sales from last year on account of stock constraints hampering sales of its Seltos SUV.

The major mover last month was Chinese brand M.G. which saw its sales spike 86.7% to 3,136 units. It has now reached eighth position among the top-selling brands across Australia, proving how valuable its sharp pricing has been to its growth trajectory.

Among other observations, Mercedes-Benz and Isuzu fell out of the top ten, while the likes of Honda, Audi, Renault and Suzuki all had a dismal month. The slowdown there is being picked up by some other brands out of Asia, including GWM/Haval and SsangYong.

Another strong month for the Ford Ranger meant it closed the gap on its fierce rival in the Toyota HiLux, with the two separated by just over 3,000 units on a year-to-date basis. In total, the HiLux has sold 44,752 units this year, while the Ranger has recorded 41,686 registrations.

Naturally, dominance there also pointed to widespread interest in utes, and the Isuzu D-Max backed this up with a fifth-place ranking on the sales charts.

The Hyundai i30 and Mitsubishi ASX were the clear leaders in terms of overall sales growth last month. At the other end of the scale, supply issues have taken their toll on the highly sought-after Toyota RAV4, with sales plunging nearly 60% compared with the same time last year.

Looking further down the list, across the entire top 20 best-selling models there were six utes. On top of that, none of the leading names were SUVs, with the remainder made up of small cars, a light car and a van. 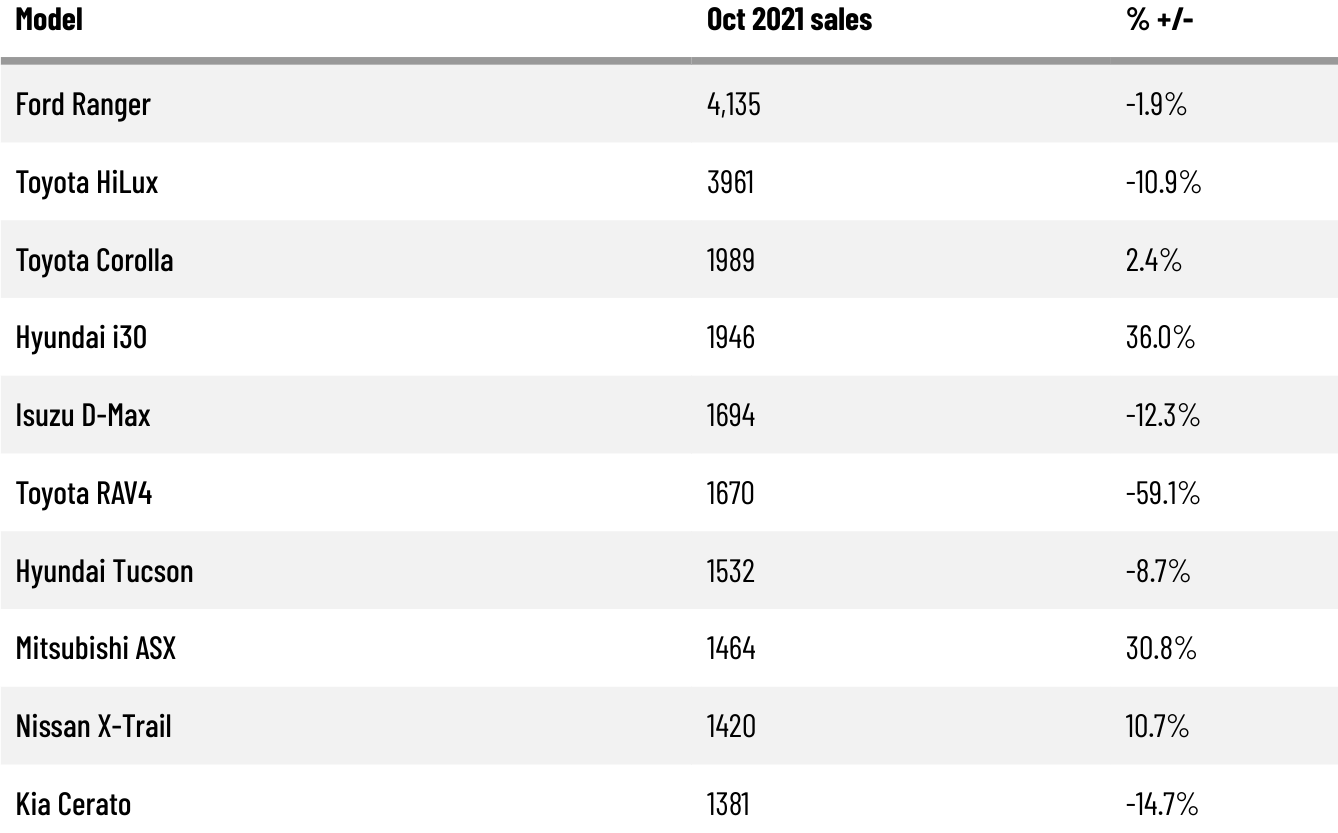 In our first piece covering December&rsquo;s new car sales, we looked into overall sales across the industry as well as a breakdown by vehicle segment. This time around we&rsquo;ll focus on how different makes and models fared last month. New car sales by brand Despite its sales slipping by nearly a third in December, Toyota ended the year as the nation&rsquo;s most-loved brand of car, with the Japanese auto-giant...

The end of 2021 came to a grinding halt, with sales hitting the brakes. However, despite the despondent figures coming through, there is some optimism among industry insiders, with new car buying demand benefitting from international travel restrictions that have prompted more Australians to holiday at home.&nbsp; Forward-orders have certainly accumulated as well, and given the technicality that means these numbers...

In our first piece covering November&rsquo;s new car sales, we looked into overall sales across the industry as well as a breakdown by vehicle segment. This time around we&rsquo;ll focus on how different makes and models fared last month. New car sales by brand Despite the fact that its sales fell by a third year-over-year, Toyota finished the month as the top-selling brand. The drop did little to dent its position...