Supply chain issues are now beginning to rear their head across the local car market, with new car sales slumping for the first time in almost a year. Microchip shortages are hampering the efforts of auto-makers to keep up with timelines for production, meaning new car buyers are facing even longer waiting times for cars to arrive down under.

Based on recent data from the Federal Chamber of Automotive industries, a total of 74,650 cars were reported as sold in October. You have to go all the way back to 2002 to find another October where fewer cars were sold, underscoring the significant pressure in the market at the moment as supply issues take their toll.

Compared with last year’s result, which itself was also largely impacted by COVID restrictions - at least in Victoria - the final figure was 8.1% worse. It brings an end to the 11 straight gains that have taken place across recent months following what was a record streak of declining sales.

Looking past the poor result, year-to-date sales of new vehicles in Australia total 890,790, which is 22.7% higher than the same period in 2020. It also means the new car market is all but certain to eclipse the million sales mark for the year, something that has occurred in every year since 2009 other than last year’s pandemic-affected year. 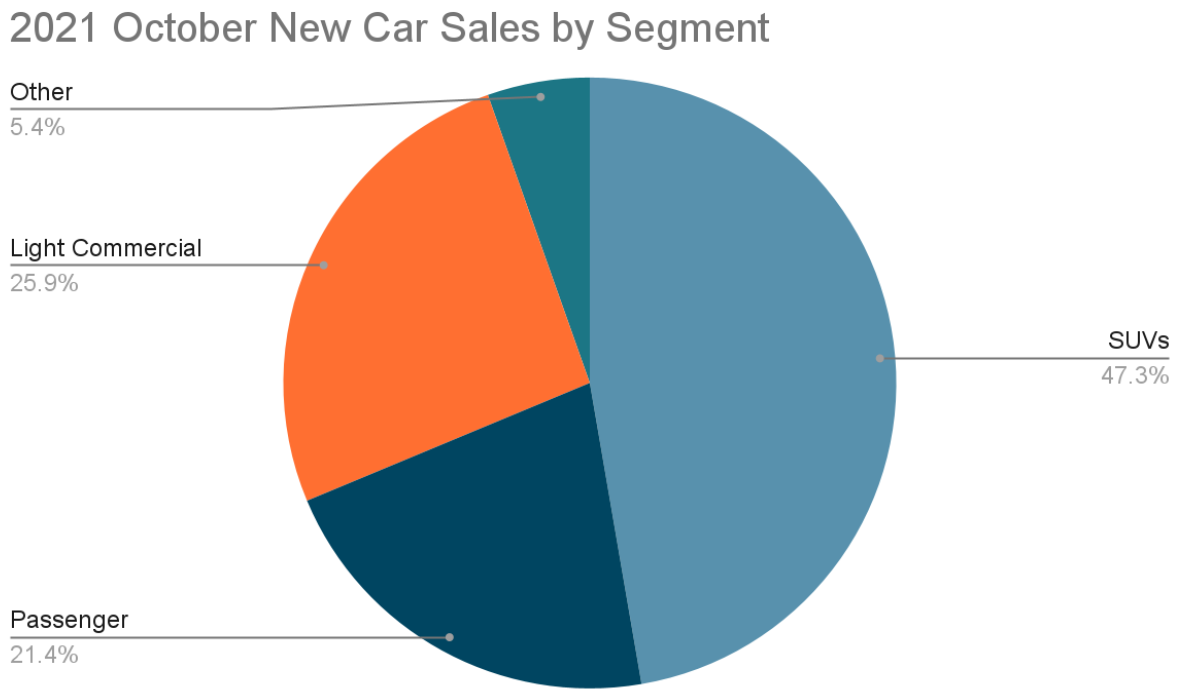 SUV sales dropped under the 50% mark in terms of market share, indicating waning interest there contributed to the broader pull-back across the market. In total, 35,343 SUVs were reported as sold in October, ensuring a market share of 47.3%. It was light commercial vehicles, however, that made up the shortfall, pulling even further away from passenger vehicles to reach a market share of 25.9%.

Finally, sales by buyer type saw weakness across three segments of the market. This included a 5.9% drop in buying among private buyers, down to 36,856 units, a 19.2% slump in sales to businesses, totalling 27,142 units, and an 18% fall in government fleet sales, coming in at 2,351 units. Rental fleets did buck the trend, largely ahead of tourism expecting to pick up with borders open, with sales soaring 68.9% to 4,290 units.

Stay tuned for Part 2 of our review into new car sales for October 2021, covering vehicle makes and models.