In what was one of the best results that we’ve seen in some time, four of the leading top ten brands managed to grow sales in October compared with the prior corresponding month.

Toyota as you might have come to expect by now, was one of the beneficiaries of the rise in buying sentiment. Sales of the Japanese car brand were up by 14.8% to a total of 19,505, and this was still short of the number of orders written by dealers, suggesting the sales momentum could flow into November.

Mazda sales jumped by 17.1%, although it appears this may have been at the expense of Hyundai, where the brand was hit by a 20.2% slump in new car sales year-on-year. Two of this year’s more resilient brands in Ford and Kia rounded out the top five and the final names that posted sales growth.

The Toyota HiLux returned to the top of the best-sellers charts last month, having recently been pipped by the Toyota RAV4 and Ford Ranger. The rebound was strong for the long-time favourite, with sales increasing by 26.4% year-on-year to come in at 4,444 units. With that said, the HiLux only just managed to edge out the two aforementioned names, with the Ranger coming in second position with 4,217 sales, up 33.4%, and the RAV4 recording 4,084 registrations, up 91.6%.

In what is an indication that the construction, mining and trades sectors of the economy are starting to tick over after state lockdowns, three of the top six best-selling models were utes. The third one to join the ranks was the Isuzu D-Max, which was number six on the list, the model’s best-ever result.

The other SUVs featuring in the top ten all fared well, with the long-standing trend indicating that Aussies are only too keen to abandon passenger vehicles and opt for something bigger. 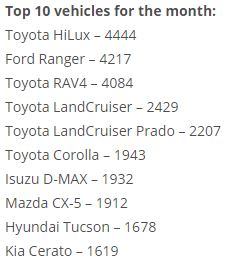