With four of the top-selling models, Toyota remained well out in front as the most popular car brand. Its sales decline (-4.6%) fared better than the national average (-9%).

Hyundai managed to edge its way back onto the podium, taking second place thanks to a small gain in sales throughout October. The company managed to grow its sales by 0.3%, which, considering the broader state of the market, is a fairly respectable achievement.

But if there was one true standout for the month, it was Kia. As it has done so often during this bleak year for new car sales, the company once again defied the trend. The auto-maker posted its best monthly result, with sales surging 10.5% to 5,062 units – enough for it to also claim its highest ever place among the top car brands, coming in at number four.

With a sharp drop in sales of the Toyota HiLux, the Ford Ranger almost managed to sneak its way into pole position, however its own shortfall in sales put a damper on that prospect.

The battle in the small car segment seems to be showing an early leader, with the Hyundai i30 outpacing its nearest rival the Toyota Corolla, and well in front of the Mazda 3, which is absent from the best sellers list. This suggests motorists may have a clear priority on prices at this moment in time, with the i30 offering a sharp position compared to its peers.

Top sellers in the SUV category are mostly entrenching their position amid strong competition in the sector. Nevertheless, the new Toyota RAV4, Toyota Landcruiser and Hyundai Tuscon all managed to grow their sales by healthy volumes. At the same time, despite sales falling, the Nissan Xtrail performed better than the market average, and it was only the Mazda CX-5 which struggled among the incumbents, with sales falling 14.6% versus last year.

Last but not least, sales of the Kia Cerato continue to go from strength to strength, with numbers climbing 36.5% for the model as it remains an integral part of the company’s success this year. 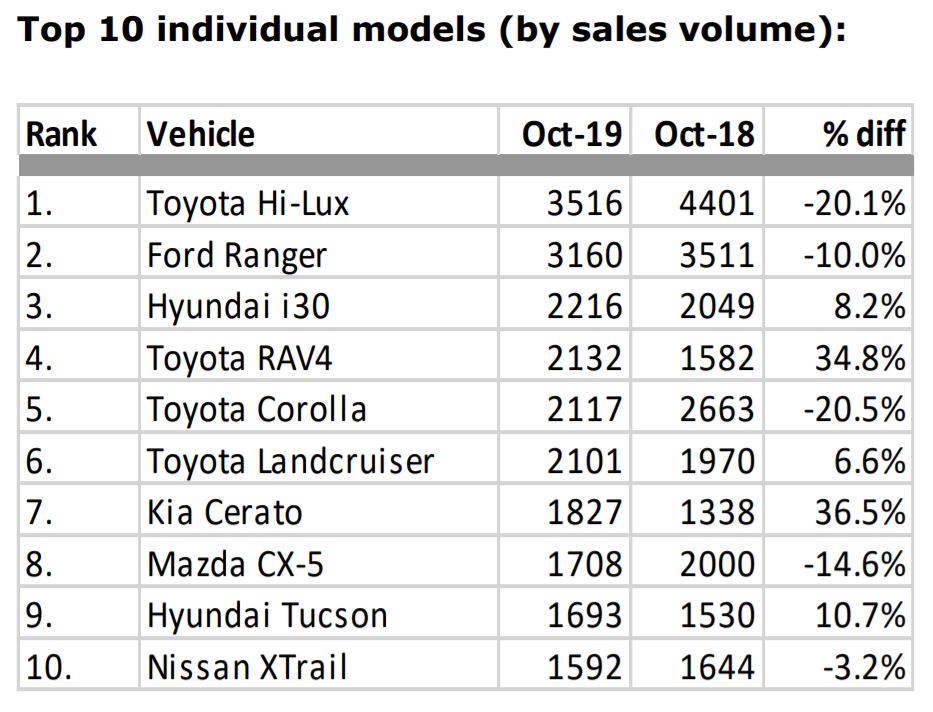