As another month goes by, we’re no closer to seeing a turnaround in the new car industry. The FCAI is now pointing to the effects “over-regulation of the financial sector” is having on vehicle sales. It’s worth noting however, while the housing market suffered from the same issue, we’re starting to see early signs there that things are on the bounce, so why is it worse here? As we do every month, it’s time to pour through the numbers.

During October new car sales were down 9.1%, with 313 fewer vehicles sold per day bringing the monthly total to 82,456 units. It also meant the year-to-date disparity compared with last year stands at 8%, with the current tally for this year perched on 893,920 units. While that number may sound quite large, it is actually the worst result since 2011.

If that’s not bad enough, 19 consecutive months of declining year-on-year sales leads to the longest downturn since the Global Financial Crisis. Back then there was a significant credit crunch, whereas now, the environment is supposed to be much more conducive to lending. Some experts however, are suggesting stricter lending protocols have hampered the uptake of new finance.

Each state and territory across the nation was caught up in last month’s poor result. While the ACT fared worst (down 21.1% to 1,119 new car sales), even Queensland, which performed the best, was anything but impressive after sales slid 7.2% to 16,132 units. 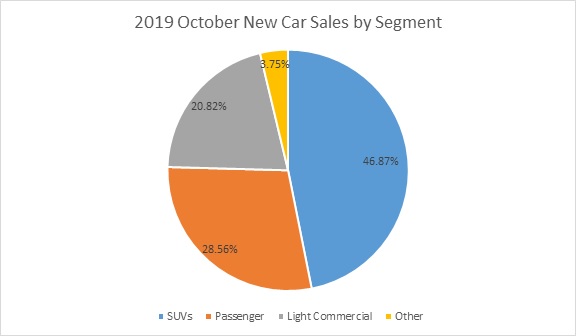 There were sharp falls in most of the primary vehicle segments last month compared to last year’s sales results. Holding up relatively well was the Sports Utility Market (38,648 units), which fell by a modest 3 per cent versus October 2018.

While electric and plug-in hybrid (PHEV) vehicles have risen three-fold, that’s because they are starting from a very low base. As such, we wouldn’t get too excited at this stage with the 273 units that left showroom floors across the country. In time however, if this category replicates the growth seen among hybrid cars, which nearly doubled from a year ago to 2,749 units, then things could look rosier.

Finally, it appears all types of buyers are shying away from spending commitments, with each major segment seeing a sizeable fall in activity. In particular, private sales were down 5.2 per cent compared to October 2018, business sales were down 8.2 per cent, and government sales fell 7.3 per cent.

Stay tuned for Part 2 of our review into new car sales for October 2019, covering vehicle makes and models.