Despite the fact that its sales fell by a third year-over-year, Toyota finished the month as the top-selling brand. The drop did little to dent its positioning as Australia’s most-loved car brand, surpassing 200,000 sales year-to-date, and with a number of other brands also seeing weakness.

Hyundai was able to hold onto second position for the second month in a row, while Ford came in third for the fifth time this year thanks to the popularity of its Ranger ute and Everest SUV. Sales for Mazda collapsed 42%, pushing it down to fifth position, but it will still end the year in second place thanks to strong sales in the first-half of 2021.

In terms of the positives, Mitsubishi was able to edge out growth of 4% versus November last year, while M.G. stole the show, with its sales up 85% compared with 2020 and finishing in seventh place.

For the third month running, the Ford Ranger was the most-popular vehicle sold last month, beating out its arch-nemesis in the Toyota HiLux. The difference between the pair was a measly 201 sales, indicating just how tight the battle has become for supremacy in the new car market. With that said, given there is only one month left in the year, it appears the HiLux will hold onto the win for sales across the year, with the current margin at nearly 3000 units.

The duo were also joined by another ute that had an outstanding month, with the Nissan Navara leaping into sixth position thanks to a 44% surge in sales last month. This was the first time the Navara has made the top 10 in 2021, and the fourth time for any Nissan vehicle.

On the contrary, the Isuzu D-Max was displaced from the top 10, which is the first time this has happened in 2021. With sales of its 4x4 variant plummeting 41%, it was enough to see other models nudge ahead, with the Hyundai i30, Toyota Corolla, Mitsubishi Outlander and M.G. ZS all doing well. 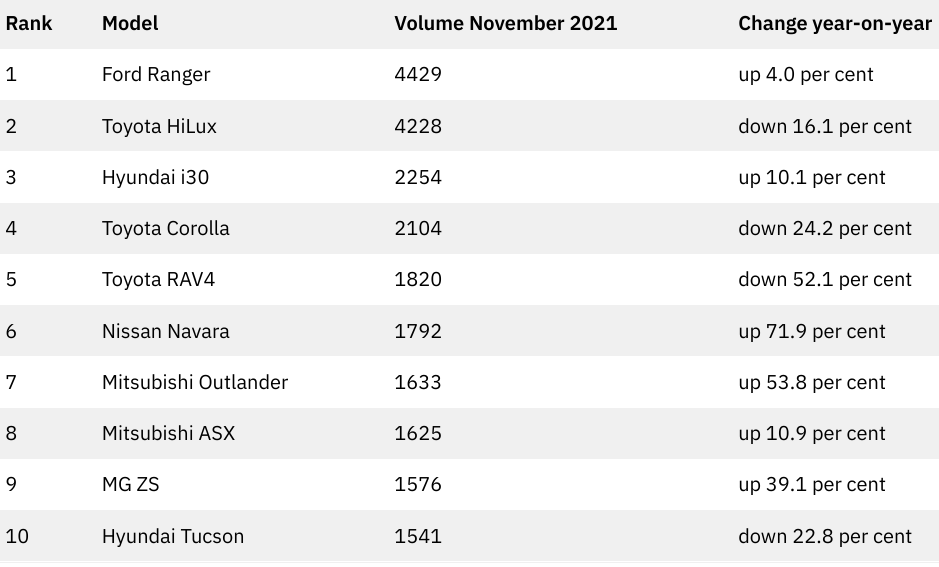