Just over half of all brands that sold vehicles to private buyers last month experienced a sales decline. On the surface, while that number might not seem all that bad, it is skewed heavily by many low-volume sellers, which defied the trend. This is confirmed by a look at the leading brands, where eight out of the top ten saw their sales fall.

Toyota retained top spot on the charts, posting sales of 16,954 units, however, that was 7.2% down from the same month last year. In distant second, Mitsubishi recorded a total of 6,861 sales, outperforming the market-wide slump, albeit still seeing its sales slide 1.3%.

There were a flurry of other manufacturers who struggled during November, although none quite suffered the same misfortune as that of Holden. If it sounds like we’re a broken record by now, that’s probably because Holden’s sales keep on deteriorating, this time falling a monumental 47.9% to 2,668 units, its worst monthly result in the entirety of its 71 year history.

Another reliable trend this year was the stellar performance from Kia, which managed to increase sales 10.7% to 5,141 units and take out fifth spot in the charts. As a far-and-away standout during 2019 for sales results, the brand continues to win market share from its rivals.

Also posting a strong result was Mercedes-Benz, with its sales surging 39.2% across November. The gain came as the German auto-maker released a swathe of new vehicle models, offering motorists an expanded line-up to choose from.

For the second month running, the Ford Ranger moved within a whisker of overtaking the Toyota HiLux as the top-selling car on the market, however, it fell just short once again. The move came as sales for the HiLux slumped, while the Ranger actually edged ahead of its 2018 volume.

Surprisingly, despite the overall market slump, four other models managed to record a sales increase last month, and a further two came within an inch of also achieving the feat. The results suggest that the popularity of the leading models has otherwise propped up slumping sales from many of each manufacturer’s less-popular models. 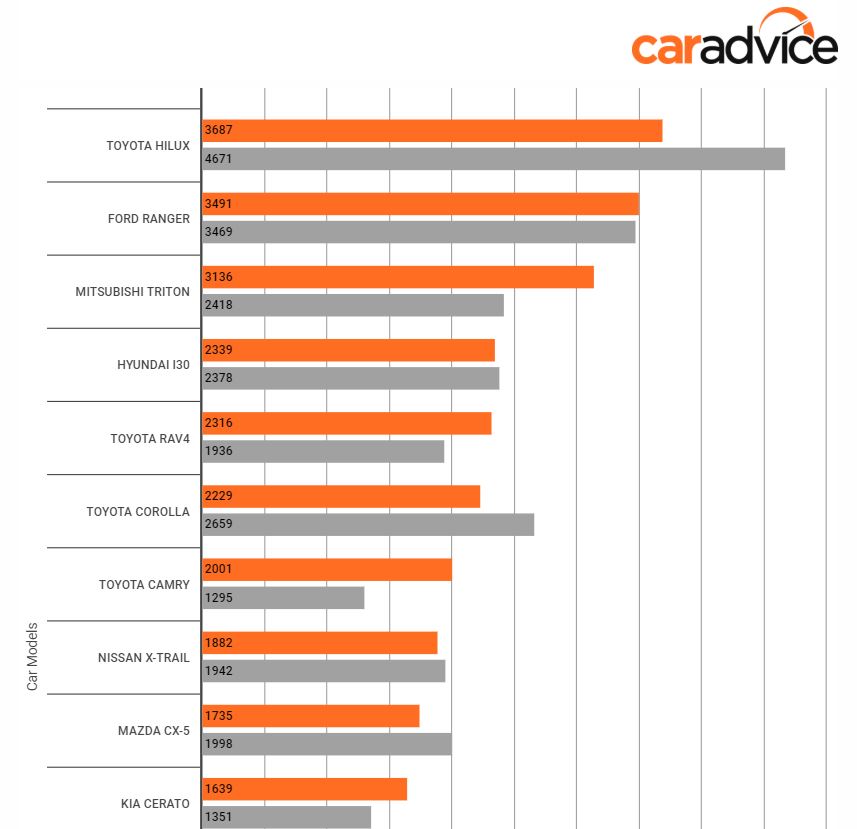