With November coming to a close, the data for new car sales once again points to a torrid time in the industry, with no respite in sight. The chief executive of the Federal Chamber of Automotive Industries (FCAI) summed it up best, calling it “a tough market”.

Beyond that, he was also on record, quoted as saying, “The industry has been looking for a lift for some time now and has activated multiple levers to achieve some stimulation, including incentives, sales and special vehicle editions. However, the appetite for new vehicles remains suppressed”.

November also marked the 20th successive month in which new car sales have declined, which is an astonishing downturn that has not been seen since the GFC. While the FCAI remain optimistic surrounding the prospect of a Christmas sales rush, recent data would suggest this is going to be a tough ask.

Once again, all states and territories struggled, with the worst being Victoria (down 10.6%), followed by New South Wales (down 9.2%) and then Queensland (down 10.7%). 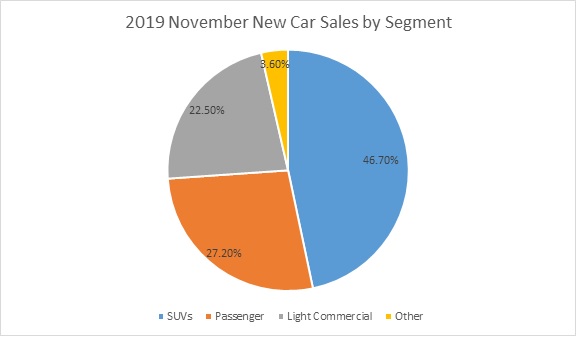 SUVs retain a stranglehold over the new car market, with an unassailing lead over passenger car sales. More interesting however, light commercial vehicles have edged up closer towards passenger vehicles, which adds weight to the argument that it is general consumers feeling the pinch amid subdued economic conditions at the moment.

Hybrid sales continue to be one of the few bright spots within the market, with sales up 137% to 3,897 units. It is also significantly above last month’s total, which was 2,749 units. Sales in the electric and PHEV categories remain weak, totalling just 331 units.

Last but not least, when analysing industry buyers by segment, we see further evidence around the difficulties facing private buyers. Sales to this segment slumped 14.7% to 34,628 units, whereas the next worst result was sales to government departments, which fell 9.2% to 3,232 units. Elsewhere, rental car sales slid 6.9%, and business fleet sales were lower by 4.5%.

Stay tuned for Part 2 of our review into new car sales for November 2019, covering vehicle makes and models.