In our first piece covering May’s new car sales, we looked into overall sales across the industry as well as a breakdown by vehicle segment. This time around we’ll focus on how different makes and models fared last month.

Last month saw a bit of a shake up among the brands and their respective positions in the top-sellers chart, however the leading trio of Toyota, Mazda and Hyundai were unchanged. Ford, Kia and Subaru were able to fractionally increase their sales during May. While Kia has posted a consistent string of positive results this year, the results for Ford and Subaru were quite impressive considering the former’s deteriorating standing in the market over the long-term, and the latter coming off a 25% year-on-year sales drop the month prior.

Mitsubishi, Volkswagen and Holden were the worst performers during the month, with sales down 26%, 16.8% and 14.4% respectively. The result from Mitsubishi contradicts some of the company’s strong sales earlier this year, albeit seasonality differences are likely to play a part on account of the timing for release of its newer models.

The new Toyota RAV4 was the standout among the top 10 selling cars in May, recording a 41.4% increase in registrations compared with the data from 2018. Given the host of inclusions that have been built into the latest edition of the already popular SUV, the car is likely to spur on sales growth for a bit of time yet.

It was contrasting fortunes for another new model that hit the markets last month, with sales of the Mazda3 sliding 8.8% to 2,359. Given the car has been slapped with a higher price-tag, the move was likely designed to help the auto-maker sure up its margins, even if at the expense of volume. The Toyota Corolla was another notable sight on the list, only this time, for its sizeable slump. Overall, the data is reinforcing the notion that now, more than ever, new car buyers are hungry for value and averse to price increases. 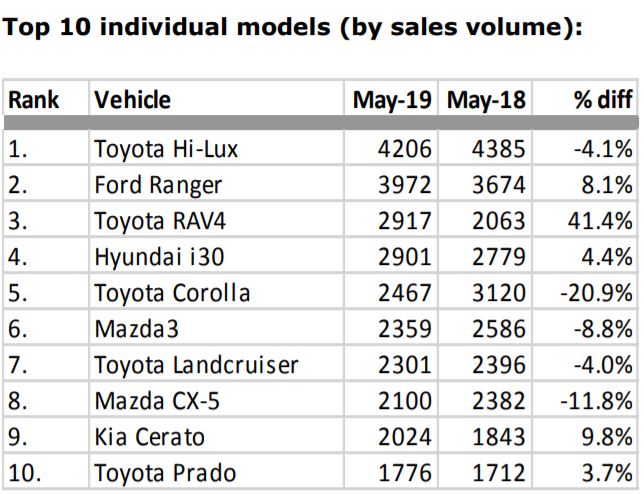