With a commanding market share of 21.6%, Toyota remains the undisputed frontrunner calling the shots across the Australian new car market. In March it sold 21,828 vehicles, which was a modest increase of 2.4% on the prior corresponding result.

Next was Mazda, with a total of 11,248 vehicles registered as sold last month, earning it a market share of 11.1%. Mitsubishi was one of the biggest movers in third position, with its sales growing by more than 40% versus a year ago to surpass 9,000 units.

Elsewhere in the top 10, the common sight of Ford, M.G. and Isuzu won’t shock anyone who has been following the new car market over the last year.

However, one brand featuring for the first time in the top 10 is none other than electric vehicle pioneer Tesla, which has begun sharing Australian sales data with the Federal Chamber of Automotive Industry. In March the US brand sold 3,097 electric vehicles, enough to see it take out 10th spot.

While the HiLux’s dominance is nothing new, Toyota laid claim to the top two best-selling models last month, with the RAV4 also having a bumper month as it recorded more than 4,600 sales.

The Mitsubishi Triton is having a purple patch, stringing together a second strong month in a row as it took out bronze on the charts thanks to 3,808 units reported as sold.

In what is an interesting bit of data, Tesla sold 3,097 units of the Model 3 in March, with the electric vehicle manufacturer finally releasing detailed data for Australian new car industry observers to digest.

That means the Tesla Model 3 has already overtaken the likes of the Toyota Corolla and Hyundai i30 as the best-selling passenger vehicle in Australia at this time, and the reality is, this may have happened some time ago given the distance it has put between itself and its peers in terms of sales.

For the second month running, the Ford Ranger had a quieter month than usual, this time slumping to sixth despite normally featuring among the top two and fighting it out with the HiLux for the attention of Australia’s ute fanatics. 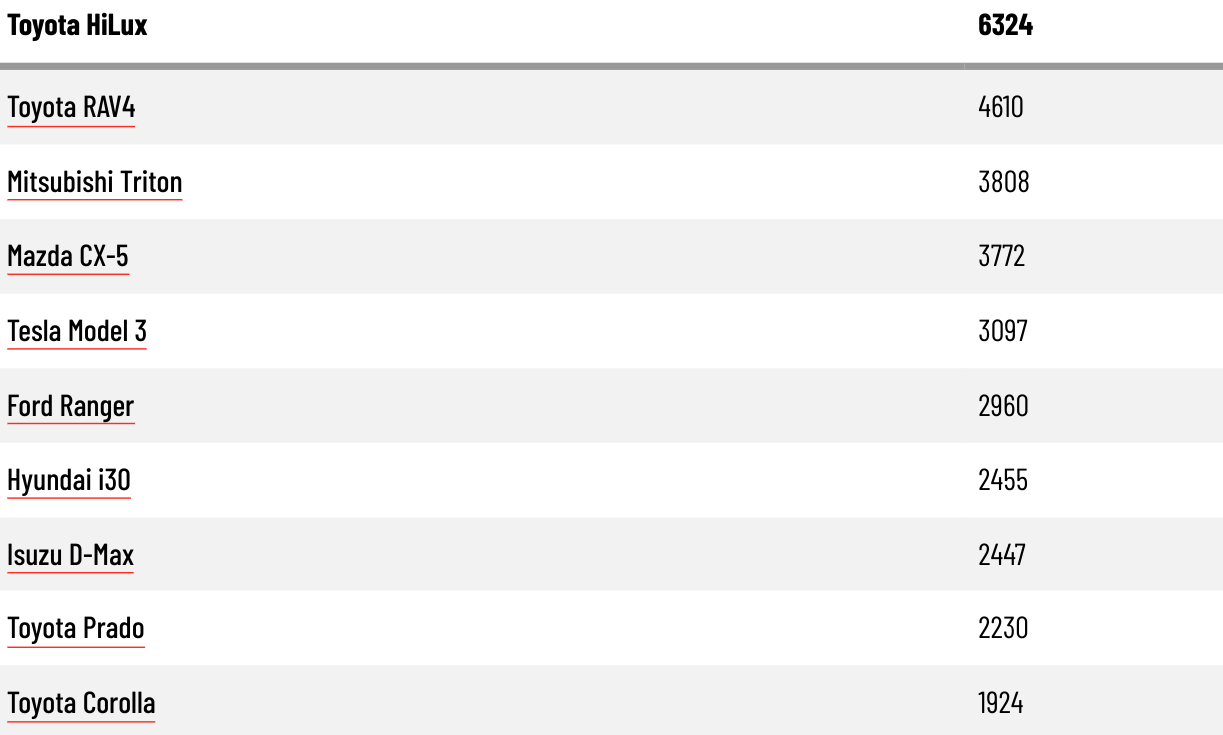