It’s a similar story for the new car market at the moment, with sales looking relatively positive when compared with a year ago, albeit weighed down by a series of headwinds that would otherwise see the industry in a far better position at the moment.

The biggest issue confronting dealers remains supply constraints, and Federal Chamber of Automotive Industries CEO Tony Weber summed it up best when he said: “This is historically a unique time in which supply rather than demand is determining the size of the market. This is due to manufacturers recovering from the pandemic-related shutdowns and the ongoing global shortage of micro processing units”.

It isn’t just the semiconductor shortage causing issues, however, with the war in Ukraine also impacting production by certain European names, and last-mile logistics issues preventing showrooms getting access to stock.

By the end of the month, which also represented the end of the quarter, the total number of new cars registered as sold stood at 262,436, which is down half a percent on the prior corresponding period. Were it not for the disappointing result in January, the market would be well ahead of last year’s comparison period.

Last month’s result came despite a weak showing in the nation’s biggest car market, New South Wales, where sales were down 6.2%. In Queensland, sales were also lower, albeit by a smaller margin of 1.7%. On the other hand, Victoria fared particularly well, with sales up 5.3% year-on-year, with the same result also recorded in Western Australia. 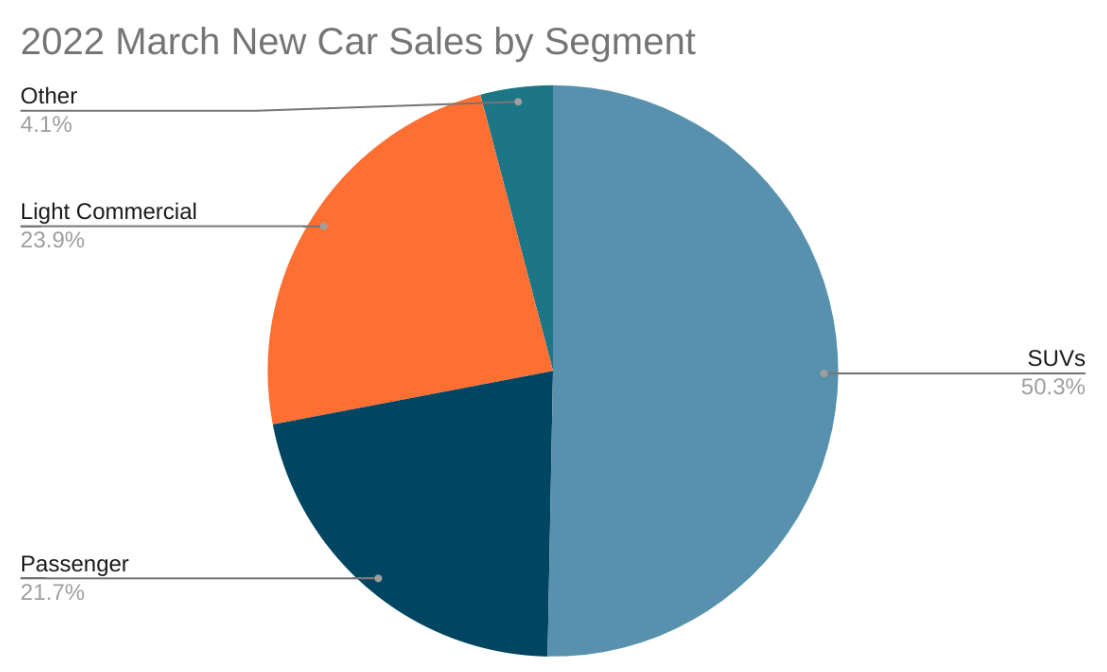 SUVs retain a majority share of all new car sales, with a 50.3% market share in March. There was a modest pull-back for light commercial vehicles (23.9%), although the category still retains a commanding lead over passenger vehicles (21.7%), and one that is unlikely to be reined in given the diminishing number of passenger sedans and hatchbacks making it to market.

China is the biggest mover in terms of sales by country of origin. Thanks to the likes of MG and co, the sale of cars sourced from China soared 90.3% in March.

Stay tuned for Part 2 of our review into new car sales for March 2022, covering vehicle makes and models.