Despite the major speed bump confronting manufacturers across the nation, market-leader Toyota managed to grow its sales last month compared with the corresponding period from last year. While the brand’s sales slowed down significantly in the second half of the month, an early rush ensured that the Japanese auto-maker pushed its sales 1.6% higher. The brand’s market share also inched higher to 21.5% on the back of the success of the HiLux, RAV4 and Corolla.

Holding onto second place was Mazda, even though its sales dived 29.1% to 6,919 units. The brand’s misfortune was spread across the breadth of its line-up, with all but one model from the company’s range declining by double-digit figures.

Faring even worse, Mitsubishi copped a 40.8% decrease in new car sales, although the move was from a higher base considering the brand’s stellar performance in March 2019.

Perhaps the biggest move, however, was saved for Kia. For the first time in its history, the Korean brand beat its compatriot, Hyundai, leaping into fourth place. Whereas Kia once again bucked the trend and delivered a remarkable increase in sales of 6.6% to reach 5,654 units, Hyundai’s sales plummeted 31.4% to 5,306 units. The decision from the latter to retire the Accent contributed strongly towards those results.

As Holden began clearing its stock at steep discounts, buyers finally showed the brand some love, with sales up 30.2%. However, as stock numbers eventually dwindle, it will be hard to see the numbers show strength for much longer.

The Toyota HiLux upheld its dominance atop the sales charts, recording 3,556 sales during March. The next-best car was the Ford Ranger, which returned to second spot with 3,108 sales after temporarily being displaced by the new Toyota RAV4. Speaking of which, Toyota’s latest-iteration SUV posted 2,991 sales to make it the leading SUV in the country.

In what might have looked like an anomaly a few months ago, the Holden Colorado powered into fourth place on the back of 2,391 sales. However, with the company taking an axe to its prices as it clears stock, as well as a renewed focus on instant tax write-offs, the move suddenly made more sense. 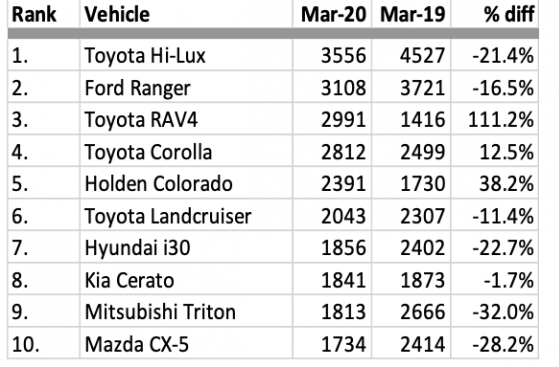