Almost as if it were the new norm, the latest car sales data paints a sorry picture for the industry. With that said, it does position buyers extremely well to pick up a bargain from dealers desperate to clear stock, provided they can shake off pre-election nerves.

Figures from March showed a 7.1% decline across the month compared with that of 2018. The total number of cars sold was 99,442, much higher than that of January and February, albeit largely on account of seasonality differences that we see each year. This is due to the fact buyers step back into the market after the Christmas holidays and as the Japanese financial year comes to a close (home to many of our favourite vehicles). The result however, was the worst sales outcome during March since 2014.

On a quarterly basis, you also have to go back to 2014 to see the last time sales were this low during the first three months of the year. That’s because sales are down 7.9% relative to the same dates last year, reaching just 265,538 units. It’s also the twelfth month in a row in which sales have tapered off.

The trend has been led by the biggest states, with Victoria and New South Wales sales down 10.5% and 9.2% over the quarter relative to the same data from the prior corresponding period. Other data points to a sobering picture, with only South Australia and Tasmania defying the trend thanks to anaemic growth of 0.2% and 0.3% respectively. Another way of putting it, both states combined sold 56 more new cars. Hardly an inspiring show of confidence. 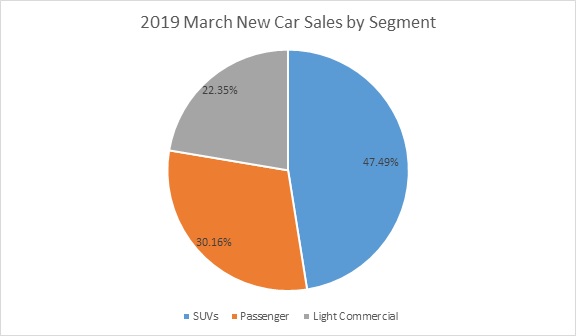 SUV sales continue to have a stranglehold over the market, and in fact, passenger cars seems to be losing further ground as they move closer towards light commercial vehicles. During the first quarter, medium SUVs held an 18.3% market share, with the next best being small cars (16.1%), 4x4 utes (15.9%), small SUVs (12.7%) and large SUVs (11.6%).

While hybrid vehicles maintain an almost negligible position with around 1.5% market share, sales did increase 28.2% on March 2018. Petrol vehicles continue to lead the way with nearly two-thirds of sales, but our love for diesel-powered utes, vans and 4WDs sees it make up the remaining portion of sales.

Rounding things out, a closer look at the types of buyers in the market confirmed that pressure came from all directions during March. Sales to private buyers were lower by 4.4%, business sales were down sharply by 8.5%, rental sales slumped 17.6%, and even the government department eased back its new car purchases 4.9%.

Stay tuned for Part 2 of our review into new car sales for March 2019, covering vehicle makes and models.