Unsurprisingly, Toyota is still well out in front in terms of sales across the Australian new car industry. The Japanese brand has a market share of 22.6%, and last month that translated into total sales of 22,516 units. For the half, the brand sold 121,377 cars, its second-best result down under in history.

In second and third were Kia and Hyundai respectively, following up on a strong result in May. The duo sold almost 17,000 vehicles between them, and were split by just a small margin. Compared with June last year, the pair saw their sales grow 7.5% and 12.5% respectively.

Despite a major setback in terms of stock issues, M.G. still managed to hold onto seventh place, and it reported 4,403 vehicles as sold last month. That result was 2.3% ahead of the prior corresponding period, although it would have been much higher if not for the headwinds at hand.

In a tough market, last month’s result from the Toyota HiLux was truly something special, with sales up 40% compared with the prior corresponding period. It was also an all-time monthly sales record for the model, with a total of 7,582 vehicles reported as sold.

However, the surprise story last month was none other than the Hyundai Tuscon, with sales surging a remarkable 89.8% to finish on 2,840 units.

The Ford Ranger was down into third place, with 2,772 sales in June. While that represents a 54% slump year-over-year, sales have been weighed down by the fact the company is delivering orders of its new-generation Ranger in July.

Toyota’s stalwarts in the Corolla and RAV4 placed fourth and fifth respectively, and both managed to deliver sales growth compared with the result from a year prior.

Other notable results include the Kia Sportage and MG HS both landing inside the top 10 best-selling models, and it was driven by a bumper increase in sales for both cars. 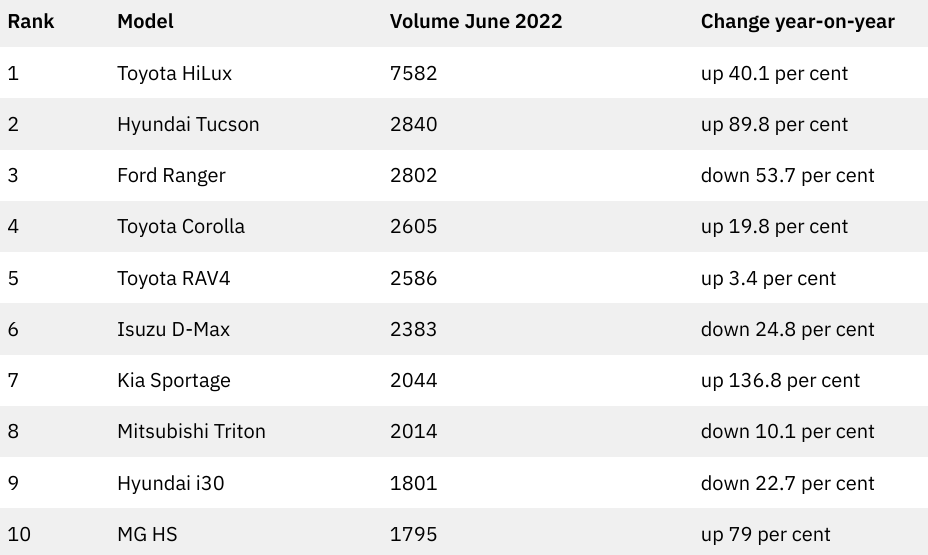 While June is one of, if not the biggest month for new car sales every year, the industry remains hamstrung by stock shortages and lengthy delivery delays that all but put a line through most EOFY discounts last month. At the same time, rising interest rates are also starting to have an effect on new car buyers, with sentiment shaken by the RBA&rsquo;s aggressive rate hike cycle. Speaking about last month&rsquo;s re...