In our first piece covering July’s new car sales, we looked into overall sales across the industry as well as a breakdown by vehicle segment. This time around we’ll focus on how different makes and models fared last month.

All but one of the top ten brands posted sales growth in July, with Mercedes-Benz (cars and vans) the only exception.

Nonetheless, Toyota remains the undisputed market leader, with 17,643 vehicles reported as sold. That number was significantly ahead of its nearest rivals in Mazda and Ford, which recorded sales of 8,919 and 5,569 respectively. In fact, the Japanese auto-maker’s sales numbers are more than the cumulative total of both of its next best-placed rivals.

Perhaps the biggest development from July was news that Nissan slipped outside the top ten for the first time in as long as we can remember. With just 2,691 units reported as sold last month, down 7.4% versus a year ago, the Japanese car maker fell into 11th position, leapfrogged by Mercedes-Benz, despite its own sales slide.

Strong results keep on trickling through for MG, which delivered 4,303 sales in July. Although this was not quite as good as its standout June report, the numbers were nearly triple those from the prior corresponding month, and it was enough for the brand to feature ninth year-to-date.

Elsewhere, Isuzu’s sales are still on the march, up 156% in the last year, while Kia and Hyundai have delivered modest if not unspectacular growth to cement their position, although the latter is certainly at lower levels than we’re used to seeing.

After being displaced from the top of the charts, the Toyota HiLux returned to the top of the sales charts in July, and it remains the best-seller in five of the seven months this year.

Not too dissimilar to the leading brands, nine out of the top ten names delivered sales growth in a sign that the top-end of the market is doing a lot of the heavy lifting, particularly as far as interest in utes and SUVs goes. The only exception to the trend was the Toyota RAV4, one of the most-popular models in recent times, however, with sales coming off a high base.

In a sign of how split the market has become, once-popular models like the Ford Escape, Honda CR-V, Kia Sportage, Nissan X-Trail and Subaru Forester have all seen their sales slide by around 40% or more when compared with last year.

The Mitsubishi Triton was dislodged from the top ten, with interest in the Isuzu D-Max still relatively high. Small cars have also become less popular, predictably, with just two names in the Corolla and i30 making the cut. MG had its first car appear in the top ten, with the ZS making an impact amid soaring sales. 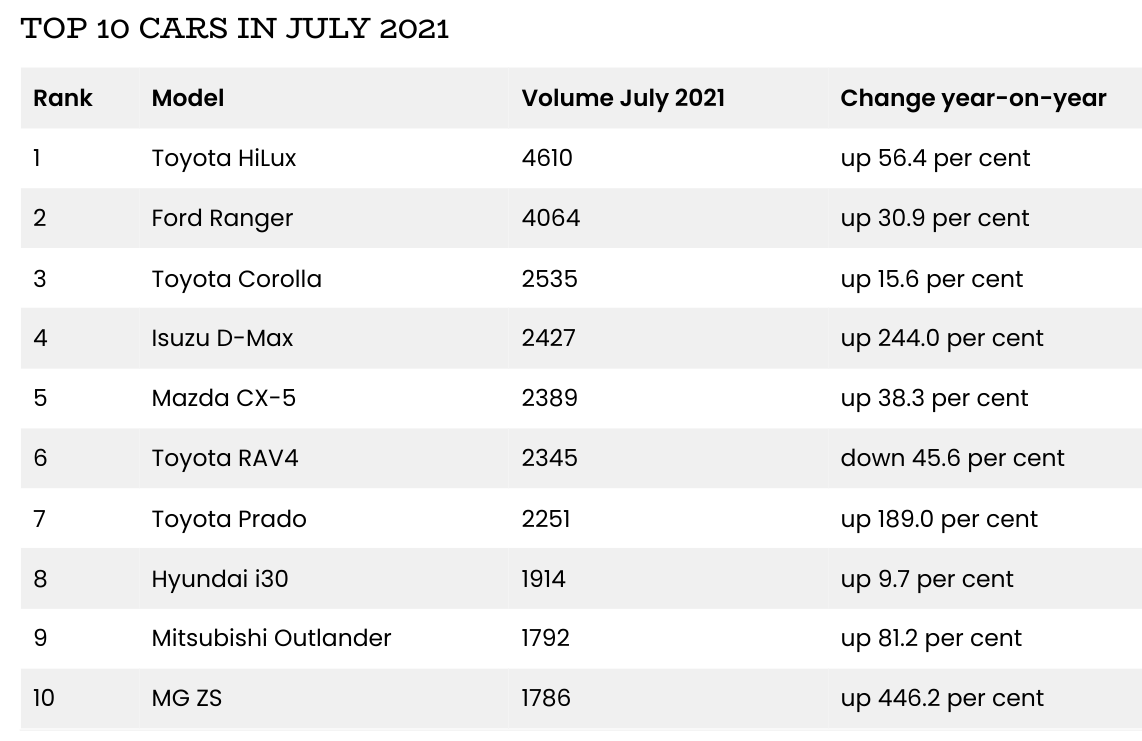