WIth its position atop the charts all but secure, market leader Toyota continues to hold a runaway lead, despite sales slipping 8.8% in January. It posted total sales of 15,333 units last month, with the result impacted by supply issues for some of its leading SUVs.

Next in line was Mazda, and the Japanese auto-maker had a bumper month, with sales surging 15.5% to a total of 9,805 units. With Toyota facing supply issues across the RAV4, a number of buyers instead piled into the CX-5 SUV, giving Mazda a tailwind that it made the most of.

There were also strong gains for Mitsubishi, with its sales soaring by 26.1% to 6,533 units. The popularity of its 4x4 Triton ute was responsible for most of the move higher.

Outside the top three, Kia edged out its sibling in Hyundai with 5,520 sales versus 5,128 sales, and then Ford placed sixth with 4,528 units registered as sold. The surprise packet for the month was MG, with the Chinese brand hitting a new high of seventh position thanks to its sales leaping 46.9%.

The rest of the top 10 consisted of Subaru, Isuzu and Nissan, with the latter struggling. Premium brands took a hit last month, with Lexus, Porsche, Land Rover, Audi and Volkswagen all posting large double-digit declines in sales.

While the Toyota HiLux and Ford Ranger took out the top two spots last month - a result that is sure to surprise nobody - the Mazda CX-5 inched within a whisker of breaking their stranglehold. It is now the best-selling SUV on the market, overtaking the Toyota RAV4, which is facing supply constraints and no longer in the top 10 after sales slumped 53.5%.

As touched on earlier, the Mitsubishi Triton was also a knockout name last month, storming up the charts thanks to sales growth of 50.7%. There were 2,876 Tritons sold last month.

Not to be outdone, the Toyota Prado soared on the back of high demand, recording 2,566 sales, which was almost 90% higher than the corresponding month a year ago.

Elsewhere, MG had two vehicles inside the top 10 for the first time, with the MG ZS and MG 3 both making the cut and even beating out the popular Subaru Forester, Toyota Corolla and Mazda 3. 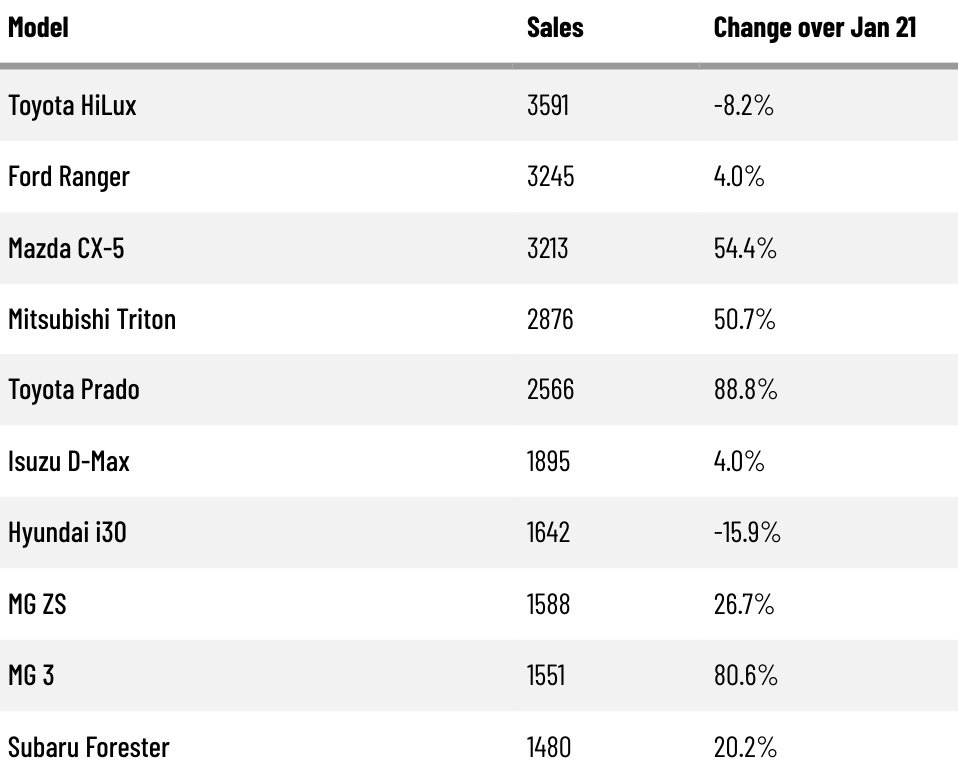