Nine out of the top 10 best-selling car brands saw their local sales grow last month, illustrating that the new car industry’s rebound has been one that is broad-sweeping.

It’s no surprise that Toyota kicks off the new car in front of everyone else yet again, although the company’s market share, at 21.1%, was down from the last three months.

Mazda was in second place, despite the fact that only one of its models featured in the top 10 cars sold last month. Nonetheless, with growth of 27.1%, that was enough to see clear daylight between it and third place company Hyundai, which sold 5,951 new cars in January.

The real bolter, however, was MG. Although the brand didn’t make the cut for the top 10, instead coming in at 11th place, the brand’s sales growth was enormous at 162%. In fact, such was the strength of MG’s sales growth, it overtook some of last year’s winners like Isuzu, Honda and BMW.

Toyota HiLux, Ford Ranger and Toyota RAV4 made up the top three best-selling cars in the market last month, a sight that has become all too familiar among those who are regular observers of the new car industry.

Toyota also had the Corolla come in at number five on the list, which despite a slide in sales, ensured that the brand was the category leader across the passenger vehicle segment, SUV segment and the light commercial vehicle segment as well.

The Isuzu D-Max had a standout month with a little over 1,800 new cars sold, however, the brand’s significant growth was driven by the fact that last month compared an all-new version of the D-Max against a low base of sales for last year’s outgoing model. 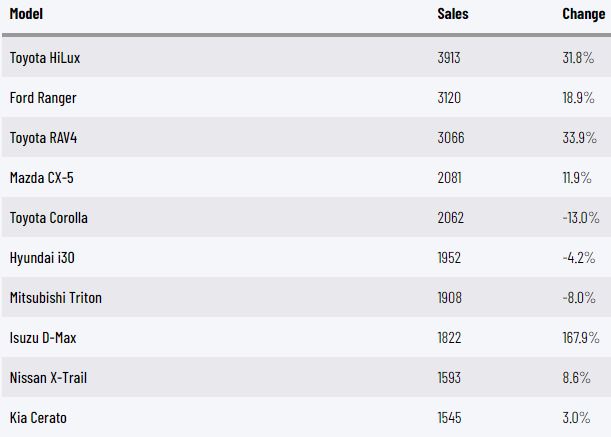