The story of the new car market has practically continued from last year, with the numbers pointing to similar fortunes for most of the nation’s leading car brands.

Toyota, as ever, was out in front, selling 14,809 vehicles last month, a comparable decrease of 7.2% versus January 2019. Mazda and Hyundai were the next most-popular brands, despite sharp falls in each of their respective sales. Mazda posted a sales decline of 29.5%, falling to 6,695 units. This was still far in front of Hyundai, which could only muster 5,443 sales amid a fall of 12.3%.

However, Mitsubishi was arguably one of the hardest-hit manufacturers, with its sales slumping 23.4% year-on-year. That was enough to ensure that the brand fell out of the top three, despite faring better than most of its peers last year, even reporting the odd month where sales grew.

Once again, however, the sole bright spot of the new car industry was Kia, which defied all the odds and saw its sales increase once again! The company recorded sales of 4,705 units in January, which was 1.2% higher than the corresponding month from 2019. Kia remains the only brand among the top-ten that has consistently grown sales in recent time, a feat that cannot be described as anything other than extraordinary given the state of the market.

The other consistent result we saw play out was yet another disastrous month for the Holden brand, as sales dived 36.6% to just 2,641 units. It’s no surprise that just a few weeks since that result, word has come through that the brand will be retired from Australia at the end of the year. 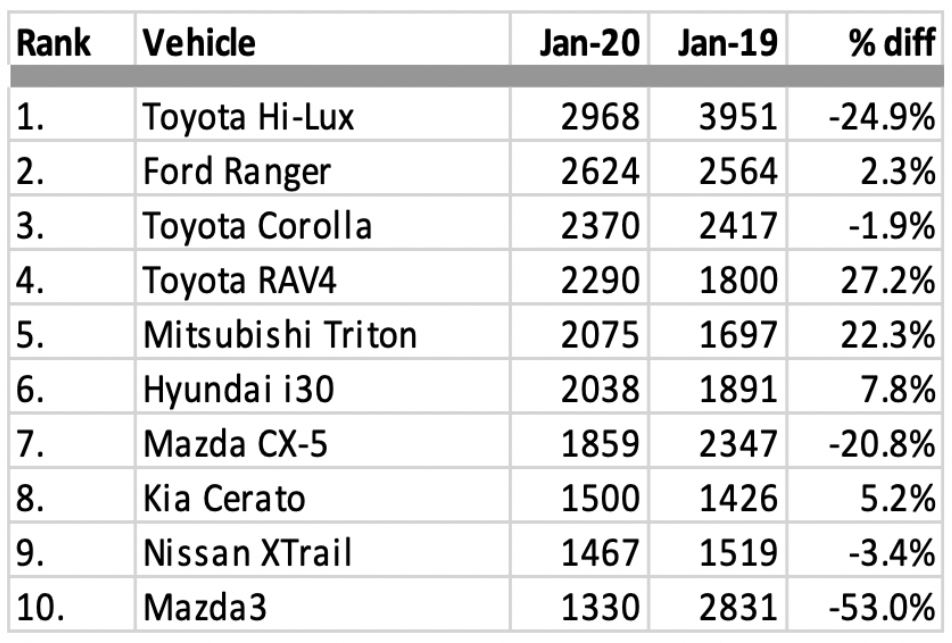 Another month, another first-place finish for the Toyota HiLux, which remains atop the chart for Australia’s best-selling vehicles. The gap between it and the second-place Ford Ranger was more than 10%, however, it’s worth noting that sales for the HiLux actually fell sharply year-on-year by a significant 24.9%. Meanwhile, Ford actually saw an increase in the number of Rangers that left its showroom floors, up by 2.3%. Is a change of guard looming at the top?

Surprisingly, across the top-ten models sold last month, five of them recorded an increase in sales.  The other positive results not already mentioned include the Toyota RAV4, up 27.2% as the new-generation continues to win over motorists, and the Mitsubishi Triton, with sales increasing by 22.3%. The Hyundai i30 and Kia Cerato round out the winners list, up 7.8% and 5.2% respectively.

Meanwhile, Mazda’s poor month became clearer courtesy of the company’s sales data, with sales of the CX-5 and Mazda3 tumbling 20.8% and 53% respectively. Much has been made of the company’s decision to change tact last year with respect to pricing, and suffice to say, the market has not responded favourably in any shape or form since that move.