After a dour 2019, the new car industry entered the year with no signs of any momentum. That was only compounded by a series of further headwinds, both locally and internationally, which quelled any chance that the market might recover.

The Chief Executive of the Federal Chamber of Automotive Industries (FCAI) gave an insight into how expectations have all but faded, noting, “given the broad range of environmental, financial, international and political issues facing Australia during January, it is no surprise to see the new vehicle market has reported a conservative start to the year”.

It should be apparent that one of the biggest factors weighing on the market has been the drought and bushfires that have ravaged a large portion of the country. Of course, the economy remains soft also.

The start of 2020 brings with it a change in reporting measures for new car sales, which may actually tighten up past practices that would see some car sales reported as sold in order to help dealers meet their targets. Without further ado, let’s take a closer look at last month’s data.

New car sales fell 12.5% last month compared with January 2019, despite the fact that last year ended up being the worst-performing year for new car sales in 8 years. In total, 71,731 cars were sold across January, which corresponded with 291 fewer cars selling per day across the month.

The last time sales were that low was in 2009, at the height of the Global Financial Crisis. Should this decline follow through to the rest of the year, there is a possibility that sales could fall below one million units, which would be a concerning development.

The east coast of Australia led the sales slow-down, with the number of units registered as sold falling 14.7% in Victoria, 13% in Queensland and 12.2% in New South Wales. There have now been 22 consecutive months where new car sales have declined. 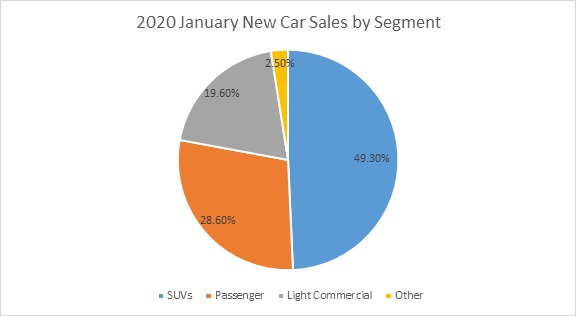 SUVs edged higher as a portion of all vehicles sold, falling just short of the 50% mark. Although comparable sales in the segment versus January 2019 fell, it was by a significantly smaller margin than the broader market. In fact, SUV sales were only down 1.5% than 12 months earlier.

Meanwhile, it was passenger vehicles that felt the brunt of the pressure. The decline in this category accounted for approximately three-quarters of the industry-wide drop, or more specifically, the segment recorded 7,556 fewer sales (-26.9%). Numbers for light commercial vehicles slid 11.2%, equivalent to 1,774 vehicles.

Japan and Thailand continue to be the primary source of vehicles being sold across the nation, representing as much as 56% of all sales. The popularity of hybrid vehicles remains one of the only areas of growth across the entire market, with sales of hybrid SUVs leaping 92.7% to 1,476 units, and sales of hybrid passenger cars jumping 13.9% to 1,924 units.

Stay tuned for Part 2 of our review into new car sales for January 2020, covering vehicle makes and models.