As we’ve become used to seeing, Toyota sits well atop the charts as Australia’s highest selling brand. What was perhaps less expected however, was a 4.3% growth in its sales in January, when the broader new car market saw sales slump by 7.4%. With 15,961 units registered, nearly one-fifth of all cars sold last month were Toyota.

Meanwhile, Holden and Ford continue to see sharp declines in their sales, with units plunging 27.1% and 21.7% respectively. They weren’t alone however, as the likes of Nissan, Subaru and Mercedes-Benz had a month to forget. 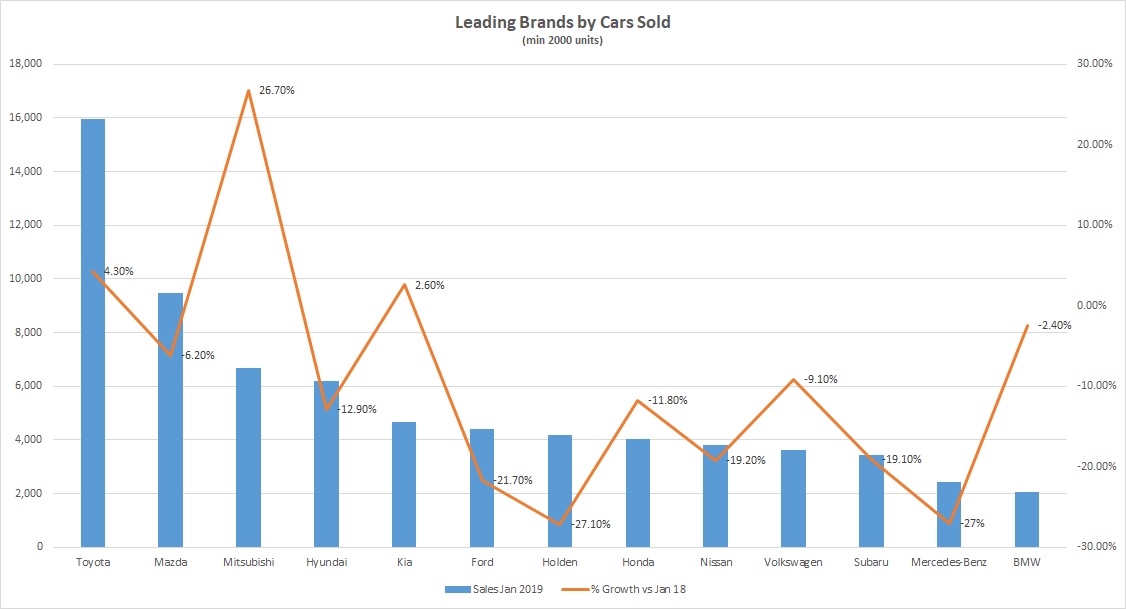 Of the top 10 vehicles sold last month, the Toyota HiLux retained its position as the best-selling vehicle in the marketplace. It even managed to increase sales by 2.4% to 3,951 units. The next 3 vehicles in the rankings all took a heavy hit compared with January 2018, but nevertheless remain firmly entrenched in the charts as regulars.

Despite its drop in sales, the team behind the Mazda 3 would be pleased with the final result, seeing it leapfrog Ford’s highly successful Ranger into second place. Keen-eyed observers will also notice a significant jump (108.5%) in sales for the Mitsubishi ASX, which comes from a low base and is largely due to an anomaly arising from sales timing.

In our first piece covering December&rsquo;s new car sales, we looked into overall sales across the industry as well as a breakdown by vehicle segment. This time around we&rsquo;ll focus on how different makes and models fared last month. New car sales by brand Toyota topped the sales charts in December well ahead of any other brand, and in the process, became the market&rsquo;s best-selling brand for the 18th year...

In a good sign for the new car industry, new car sales posted their second consecutive month of growth when measures year-on-year. Signs have been looking promising for a while now, however, the late flourish to the year bodes well as we enter 2021 with more optimism for the economy and health situation at hand. In commenting on the results, FCAI chief executive Tony Weber noted that the last three months of the yea...

In our first piece covering November&rsquo;s new car sales, we looked into overall sales across the industry as well as a breakdown by vehicle segment. This time around we&rsquo;ll focus on how different makes and models fared last month. New car sales by brand With the industry rebound finally coming to fruition, there were success stories for various brands last month. First, Toyota delivered its best monthly re...