In our first piece covering February’s new car sales, we looked into overall sales across the industry as well as a breakdown by vehicle segment. This time around we’ll focus on how different makes and models fared last month.

Defying the broader market slowdown, Toyota actually posted strong growth in new car sales across February. The company managed to increase comparable sales by 8.1%, with sales of the RAV4 (up 105.9%), Yaris (up 82.2%) and Corolla (up 21.7%) underpinning the result.

Mazda managed to hold onto second position last month despite a sharp drop in sales. With each of its key models struggling to find traction among price-sensitive motorists, the auto-maker’s sales slumped 21.7%.

Rounding out an unchanged leading trio, Hyundai recorded sales of 5,945 units, a decrease of 7.5% on the same month last year. Hyundai’s sales were hurt by the phasing out of the Accent, which was once a best-seller in its segment.

One of the biggest hits was felt by Mitsubishi, with a sharp fall in sales for its ASX and Triton models damaging the company’s results. In the end, the Japanese manufacturer could only muster up 5,513 sales, which was 35.1% lower than what it recorded in February 2019.

Proving that its price-conscious strategy is paying dividends, Kia delivered yet another positive month of sales growth, with 5,120 Kia cars registered during February. This was equivalent to 5.4% sales growth, putting the Korean manufacturer in a category of its own as the only company to consistently grow sales over the last 18 months.

Meanwhile, Holden was nowhere to be seen inside the top 10, with its sales slumping by nearly 50% despite the fact that dealers were running clearance sales across the country.

As alluded to above, Toyota’s sales results were the standout, but it wasn’t necessarily the much-lauded HiLux accounting for the growth. Instead, it was the new RAV4 which took the market by storm, with its sales up more than 100%. A big part of this is due to the growing prominence of hybrid fuel technology, with the RAV4 considered one of the most sought-after options for motorists considering making the switch.

Sales growth for the Toyota Corolla and Hyundai i30 proved that the small passenger car isn’t completely out of favour at the moment. The significant jump in sales for the Kia Cerato only reinforces this notion further and bodes well for the segment. It may also suggest that pricing is becoming even more important to motorists despite the popularity of leading SUVs and utes, which outside of the RAV4, didn’t necessarily enjoy their best month in terms of sales growth. 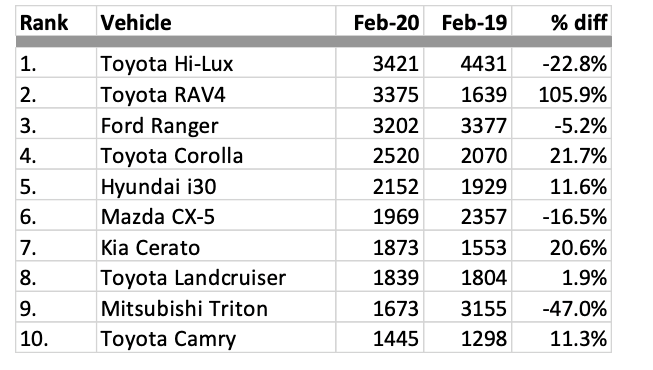