In our first piece covering December’s new car sales, we looked into overall sales across the industry as well as a breakdown by vehicle segment. This time around we’ll focus on how different makes and models fared last month.

Despite its sales slipping by nearly a third in December, Toyota ended the year as the nation’s most-loved brand of car, with the Japanese auto-giant tightening its grip on the local market.

Across 2021 Toyota recorded 223,642 sales, which is its third-best result down under. In a sign of how the times are changing, approximately 30% of Toyota’s sales came from hybrid vehicles, with the RAV4 the main drawcard. The brand’s market share did ease from 22% to 21%, however, this was largely due to sales growth elsewhere, particularly up-and-comer brands.

Last month saw a couple of notable winners, with MG the clear standout, but Kia also faring well. The former saw its sales surge by 20%, with the Chinese brand placing seventh for sales last month, matching its best result on record. It also finished ninth overall for 2021, with sales up 156%, and beating out some high-profile rivals like Subaru. On the other hand, Kia’s sales edged higher by 4% versus the same month last year.

Meanwhile, Volkswagen and Nissan took a hit in December, with the duo’s sales down 25% and 36% respectively. Both brands have come under pressure lately, falling out of the top 10 at one stage or another.

On a more positive note, Mazda, placing second for the year, topped the 100,000 mark for annual sales, totalling 101,119 for all of 2021. It is the first time since 2018 the brand has done so. Hyundai also beat out its rivals in Ford, Mitsubishi and Kia to claim third position in a close-fought contest.

As we’ve become used to seeing lately, utes were the dominant category of car inside the top 10 best-sellers last month. In total there were five utes occupying positions within the leaders list, led by the Ranger and HiLux, and including the Isuzu D-Max, Mitsubishi Triton and Nissan Navara.

For the fourth month in a row, the Ranger pipped its fierce rival in the HiLux, although it couldn’t pull back the gap between the two across the calendar year, with around 2,500 units separating the duo. That means it was another year where the HiLux was Australia’s most-loved car, however, as some consolation for Ford, the Ranger did outperform the HiLux in the 4x4 category and also delivered higher sales growth for the year at 23% versus 17%.

The Toyota Corolla disappeared from the leaders list in December, which is the first time this occurred in 2021. Sales were down by around half as the well-known model recorded just 1,271 sales last month.

SUVs keep powering ahead, with the Toyota Prado placing fifth last month for its equal-highest result this year, and eighth across the entire year. Meanwhile, the MG ZS saw sales almost double in December versus the prior corresponding period. Neither could match the success of the Toyota RAV4, which was the most-popular SUV for the second year running, even though sales eased 7%. 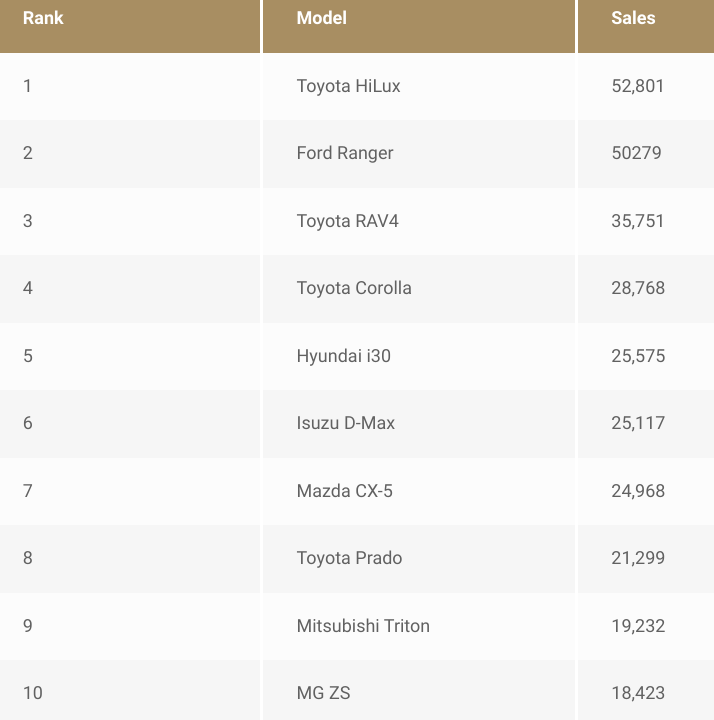