The end of 2021 came to a grinding halt, with sales hitting the brakes. However, despite the despondent figures coming through, there is some optimism among industry insiders, with new car buying demand benefitting from international travel restrictions that have prompted more Australians to holiday at home.

Forward-orders have certainly accumulated as well, and given the technicality that means these numbers don’t get counted until registered at a later date, that is providing one positive sign for the coming months. The Federal Chamber of Automotive Industries (FCAI) has also honed in on this glimmer of hope, with CEO Tony Weber saying that “despite the pandemic restricting access to showrooms in 2021, Australian consumers found ways to purchase new vehicles and did so in solid numbers”.

Due to the ongoing semiconductor shortage, supply issues continue to remain the most pressing challenge for the automotive industry, both home and abroad, including key markets where Australia sources its cars.

New car sales in December totalled 78,402, which was far below the prior corresponding result from 2020. A year ago there were 95,652 units registered as sold, which means last month’s result was 18% lower, and also represented the worst December result since the Global Financial Crisis, when there were just 76,510 vehicles sold in December, 2008.

The new car industry has now seen three months in a row of declining sales, which follows an 11 month stretch where sales had started to rebound after a long industry slump. In what is a positive for the industry, however, new car sales eclipsed 1 million for the calendar year, something that puts the dire result of 2020 now firmly behind us. 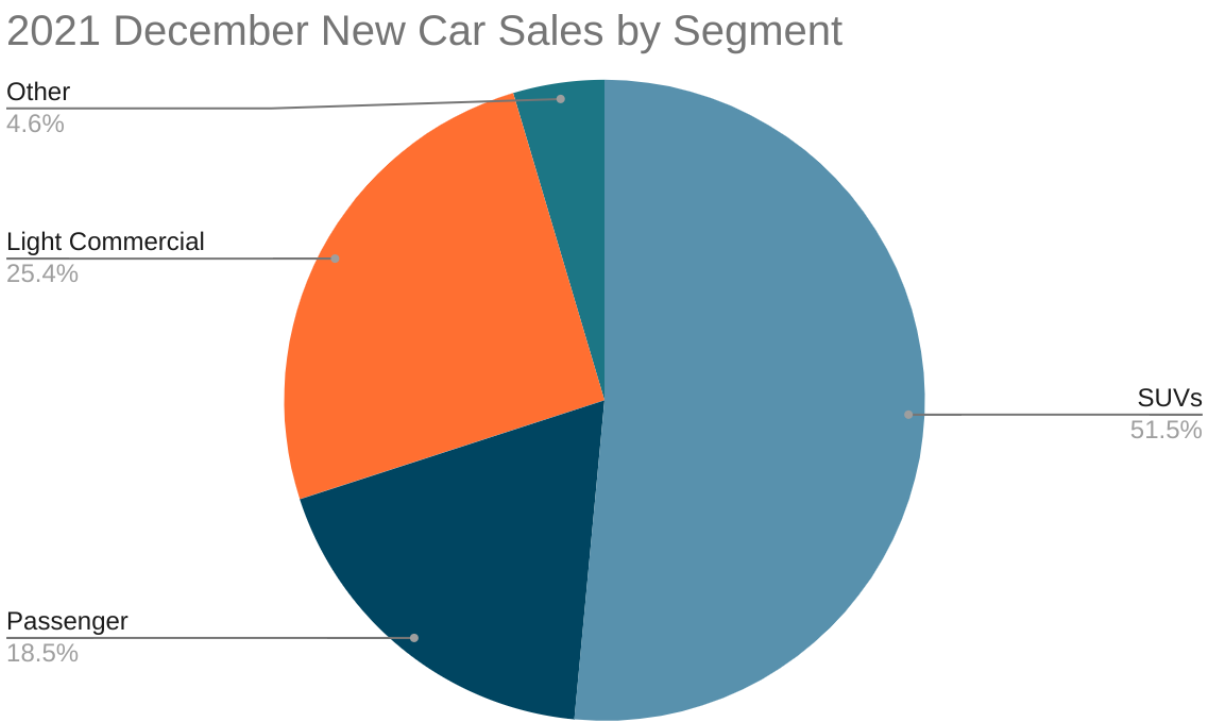 The passenger vehicle segment is still seeing its fair share of struggles, with sales from this category representing just 18.5% of all new cars sold throughout December. That’s one of the lowest numbers we’ve seen on record, and it coincides with the ascension of SUVs and utes.

Despite outranking passenger vehicles, SUVs had a setback of their own last month as sales slumped 18% versus last year. The only reason the story was worse for passenger vehicles was because sales dived 27% across the same period, while light-commercial vehicles suffered a more subdued fall of 12%.

In terms of individual segments, medium SUVs led the market with 15,192 sales, and tallied 180,165 units for the full calendar year. 4 x4 utes were the biggest winner over the full year, however, with 189,614 units registered as sold.

For the first time ever in a calendar year, China has edged ahead of the US and Germany as a source of vehicles imported down under, placing 4th overall. The leading trio remains Japan, Thailand and South Korea.

Stay tuned for Part 2 of our review into new car sales for December 2021, covering vehicle makes and models.