In our first piece covering December’s new car sales, we looked into overall sales across the industry as well as a breakdown by vehicle segment. This time around we’ll focus on how different makes and models fared last month.

Toyota topped the sales charts in December well ahead of any other brand, and in the process, became the market’s best-selling brand for the 18th year in a row. With a total of 23,470 car sales in December, the result was 35.6% ahead of last year’s comparable result.

In second place last month was Mazda, despite the fact that only one of its vehicles made it into the top 10 best-selling models. Nonetheless, across the board, sales were higher by 42%.

Sliding into third place on the podium was Hyundai, with sales up 26.1% for the Korean brand.

Of the other brands in the top 10, just three recorded negative growth in sales last month, being Mitsubishi, Kia and Volkswagen.

The nation’s favourite car, the Toyota HiLux, maintained its stranglehold atop the sales charts with yet another month of strong sales. For the fifth year in a row, the ute also took out the title of the best-selling vehicle across Australia, beating the Ford Ranger, which has now been runner up four successive years. Toyota’s HiLux is a favourite among mining states, leading vehicle sales in Northern Territory for two decades, in addition to more than a decade in Queensland and Western Australia.

The best-selling SUV across the market was the Toyota RAV4, marking its first time to achieve such a feat. A large part of its popularity was the growing interest in hybrid technology. In the passenger vehicle segment, the Toyota Corolla led the category for sales for the eight consecutive year.

A bumper month for the likes of the Toyota Prado and Toyota LandCruiser also coincided with more Australians exploring their own outback amid international border restrictions. 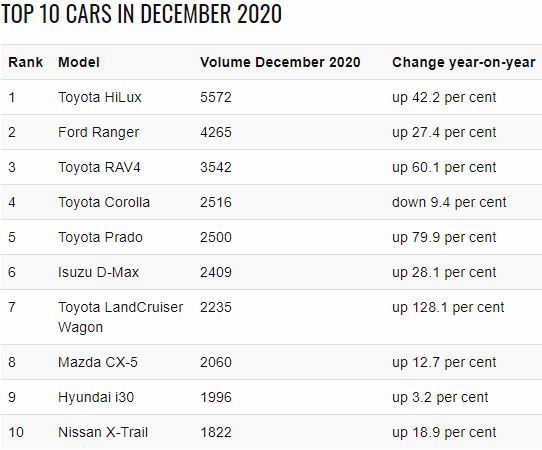