In a good sign for the new car industry, new car sales posted their second consecutive month of growth when measures year-on-year. Signs have been looking promising for a while now, however, the late flourish to the year bodes well as we enter 2021 with more optimism for the economy and health situation at hand.

In commenting on the results, FCAI chief executive Tony Weber noted that the last three months of the year brought with it an “easing of prohibitive lending restrictions”, as well as the ongoing rollout of “unprecedented economic support”. Stock shortages were also identified as an issue in December, meaning the result may have otherwise been better, but that underlying demand for 2021 is encouraging.

In total, December saw 95,652 vehicles reported as sold, which was 13.5% higher than the same time a year prior. It was also the highest result for the month in three years, as was the case for November’s result.

Across the calendar year, there were 916,968 cars registered as sold. This represented a fall of 13.7%, however, it was well ahead of where the market was drifting in the first half of the year, when sales crashed.

Nonetheless, despite the positive finish to the end of the year, 2020 saw sales drop below the 1 million threshold for the first time since 2009, and in the process, slump to a 17 year low. 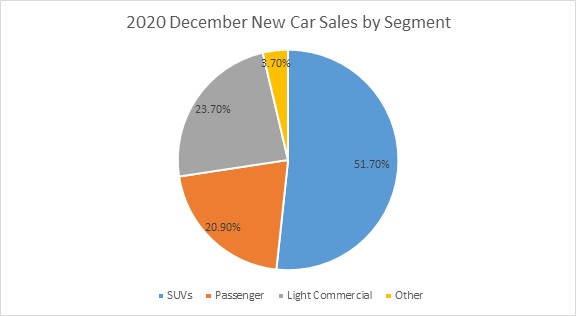 Much of December’s buying activity was spurred on by private buyers, with that segment of the market recording a significant increase in sales of 40% when analysed year-on-year for growth.

With the instant asset write-off also requiring businesses to have bought vehicles by the end of the year, there was a rush for utes and SUVS.

The continuing growth of electric vehicles shows no sign of slowing down, even if it has been led almost exclusively by hybrids. Total electric vehicle sales leapt 69.3% in December 2020 from a year earlier to 6,540 units. While there were also significant percentage increases for pure electric cars and plug-in hybrids, both were from a low base, emphasising that hybrids remain the catalyst for change at this time.

Stay tuned for Part 2 of our review into new car sales for December 2020, covering vehicle makes and models.